But the leakers still hadn’t finished. The Gambler, Inherent Vice, A Most Violent Year and Kill The Messenger appeared on public sites and those more private, followed by Cake and Wild this week.

But while those are all Western titles, it is a movie hailing from the East that offers the most interesting back-story, from both political and piracy perspectives.

Partially financed by the Russian Culture Ministry, Leviathan tells the story of a man fighting against corruption in a Russia depicted as dark and cruel. Leviathan just picked up the Golden Globe Award for Best Foreign Language Film and is also nominated for an Oscar.

Like all of its counterparts listed above, Leviathan too has leaked onto the Internet in DVD screener format. However, what is particularly interesting is how the movie’s makers are handling this development.

“All the films nominated for an Oscar have been downloaded by pirates. We are not going to pursue anybody,” Leviathan producer Alexander Rodnyansky told local media.

While that might be music to the ears of file-sharers, the response from fellow digital producer Slava Smirnov generates yet more interest in the movie. In solidarity with the filmmakers, Smirnov has just launched an independent website with the aim of taking donations from downloaders and forwarding that money to the crew of Leviathan.

“As a result of leakage of all films nominated for an Oscar in 2015, the film Leviathan was on the Internet before it hit the box office in Russia,” a note on the site reads.

“Here you can express gratitude to the team of the film, using a simple form to transfer any amount. Fundraising will continue until February 5, 2015.” 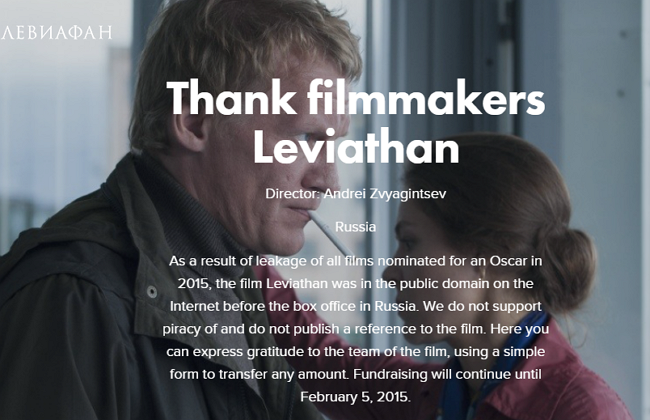 Speaking with local press, Alexander Rodnyansky said the team behind the movie appreciates the gesture.

“That’s an amazing story, it seems, unprecedented even. A talented young man named Slava Smirnov made this site on his own initiative and to him we are very grateful,” he said.

“If any of those who have downloaded and watched Leviathan would like to express their response to our film in a tangible form, they can do so through this website.”

But while Rodnyansky offers his clear support to the fundraiser, he’s actually refusing to take any of its proceeds. The producer says any donations should be sent directly to the children’s cancer charity “Give Life” founded by actresses Chulpan Khamatova and Dina Korzun.

In the meantime Leviathan continues to be downloaded from dozens of sources, a situation worsened by the fact that the movie won’t go on general release in Russia until next month. That has prompted rumors that the filmmakers themselves leaked the movie. Rodnyansky refutes the claim.

“No, we certainly did not upload a copy of the film to the Internet. But be aware that there is always a risk of leakage, and it is huge,” Rodnyansky says.

“One of the most popular online issues (and it is not the most pleasant for me) remains the question of the Russian theatrical release date. Why does a full release in the Russian homeland come so late, after already rolling out in France, the UK, Switzerland, Korea and other countries?”

While angry over the leak and late release window, Rodnyansky is also disappointed that the quality of the copy being made available online is not up to standard. Nevertheless, there are some upsides, with various publications and the public now increasingly “warming” to the movie.

“These considerations guided me when I say that we will not pursue viewers who have downloaded ‘Leviathan’ before the premiere. Viewers we will not pursue, but [takedowns] on pirate sites – that is necessary,” Rodnyansky concludes.

Finally, there’s another twist that may only encourage pirate downloads of Leviathan, even when the movie screens next month. The DVD screener copy which leaked from an Academy member on January 11 is full and uncut. However, the Kremlin insists that Leviathan will have to be edited before release to remove unacceptable levels of profanity.