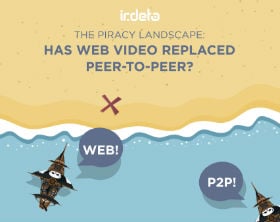 In recent years Hollywood and other entertainment sources have focused their enforcement efforts on pirate streaming sites and services.

According to several reports, streaming sites get more traffic than their P2P counterparts, with the latter being almost exclusively BitTorrent related.

While the rise of online streaming sites can’t be denied, a new research report from anti-piracy outfit Irdeto shows that P2P remains very relevant. In fact, it’s still the dominant piracy tool in many countries.

Irdeto researched site traffic data provided by an unnamed web analytics partner. The sample covers web traffic to 962 piracy sites in 19 countries where P2P was most used. This makes it possible to see how P2P site visits compare to those of pirate streaming sites.

The data reveal that there are massive differences in the relative use of P2P versus streaming sites between countries.

In Russia, for example, only 2% of the visits go to streaming sites, while the rest of the traffic goes to P2P portals. P2P also outperforms streaming in other countries such as Australia, the Netherlands, and India.

This pattern is reversed in Germany, where 88% of all visits go to pirate streaming sites. Similarly, streaming is also the dominant web piracy tool in the United States, France, Spain and other countries.

Additional research in eight countries shows that piracy traffic has grown during the course of 2017. This growth also applies to P2P sites, in all but one country, Germany.

Looking at the sample as a whole, Iredeto notes that 70% of all pirate traffic goes to P2P sites, which appears to run counter to the popular narrative that streaming is more dominant today.

“While many expect P2P piracy to be taken over by streaming and direct downloads, it’s clear that this has not happened yet. P2P piracy is still a big threat to the industry, in which the overall piracy problem is growing,” Peter Cossack, Irdeto’s VP of Cybersecurity Services says.

“While the increase in bandwidth and social media has facilitated growth in content redistribution piracy, particularly around live sporting events, it is clear that other forms of piracy are not going away any time soon.” 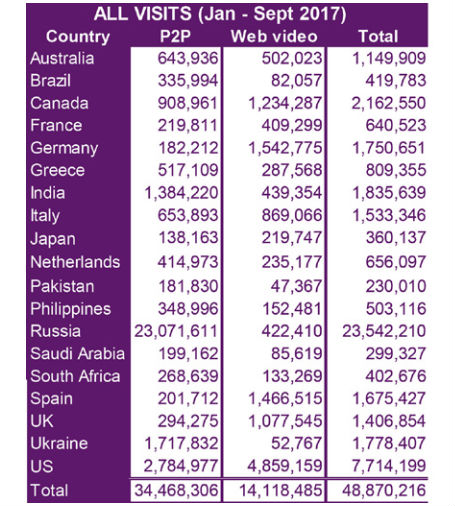 While the data provide an interesting look at the regional differences it should be interpreted with caution. First, the sample only includes desktop visits. This might be a problem since streaming sites are arguably more popular on mobile platforms.

Also, the 19 countries were selected because they had the highest number of P2P downloads. That’s a significant selection bias that favors P2P sites.

Finally, and perhaps more problematically, the traffic data are not weighed. For example, nearly half of all visits in the sample come from Russia, which is significantly overrepresented.

That means that visits can’t simply be added to draw overall conclusions, something Iredto seems to do.

The company does make a few solid points though. With an estimated 800 million global monthly downloads from P2P sites in 2017, BitTorrent should not be disregarded.

The report also notes that P2P sites are mostly visited by “committed pirates” who don’t use legal streaming sites, while about half of the visits to pirate streaming are from “casual pirates.”

Finally, Irdeto points out that P2P sites are ‘content’ suppliers too. They often act as a source for streaming sites. In other words, the videos people watch on streaming portals were taken from P2P sources, which underlines that these play a vital role in the piracy ecosystem.

A copy of Irdeto’s report is available here. We asked the company several questions about the methodological issues we found, but at the time of writing we haven’t heard back.