Ipoque, a German based company that specializes in developing bandwidth managing solutions for Universities and ISPs concludes this from data they gathered between August and September 2007. In total, over 3 Petabytes (3 million Gigabytes) of traffic was analysed, coming from an estimated 1 Million users

They found that Eastern Europe has the highest percentage of P2P traffic relative to all other Internet traffic, Germany comes in second place with 69% and Southern Europe ended up in fourth place with 64%. 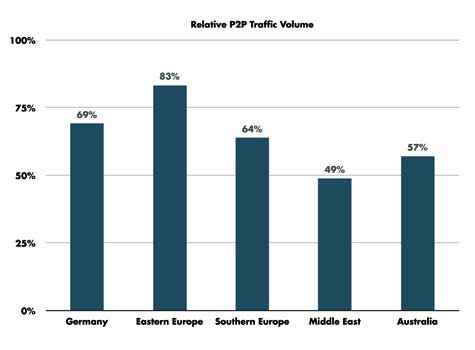 Below is a graph that shows the P2P-protocol breakdown for the different locations. There is quite a bit of regional variance in the use of P2P applications, For example, in Eastern Europe DirectConnect has a proportion of about 30% of all P2P traffic, while it is pretty much non existent elsewhere.

If we combine both graphs we can also conclude that BitTorrent is generating the most bandwidth in Eastern Europe, where it is responsible for 55% of all Internet traffic.

Another interesting finding is that Australia has the highest percentage of BitTorrent users, 73% of all P2P users use BitTorrent there. 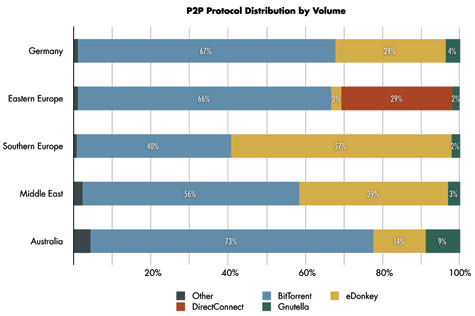 Ipoque was also able to gather data on the number of people that use encryption. Their data collection methods support the detection of both unencrypted and encrypted protocols that use various forms of obfuscation, and they found that on average 20% of all BitTorrent users enabled encryption. 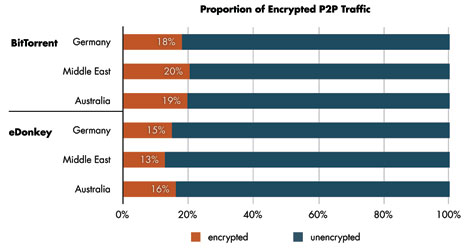 As we have mentioned before, keep in mind that Internet traffic research is often conducted by companies that offer broadband management and optimization solutions. It is in their best interest to overestimate the percentage of p2p-traffic and encryption because they sell the traffic shaping applications that help ISPs to manage their precious bandwidth.

From Ipoque’s data we can safely conclude that BitTorrent is still the dominant P2P protocol, and that P2P is responsible for more than 50% of all Internet traffic.