PayPal is widely known for their aggressive stance towards BitTorrent sites and file-sharing services, and now this policy has also been actively applied to Usenet providers.

On Tuesday, PayPal cut off its services to five Usenet resellers including XSUsenet, EasyUsenet and Usenet4U, reports the Dutch news site Tweakers. The Usenet providers can no longer accept PayPal payments and the funds that remain in their accounts have been frozen for 180 days.

While this is the first time that we have heard about Usenet providers being banned, the actions don’t come as a complete surprise. To be accepted by PayPal, file-hosting services now have to comply with a list of far-reaching demands entirely targeted at copyright-infringing and otherwise illegal files. 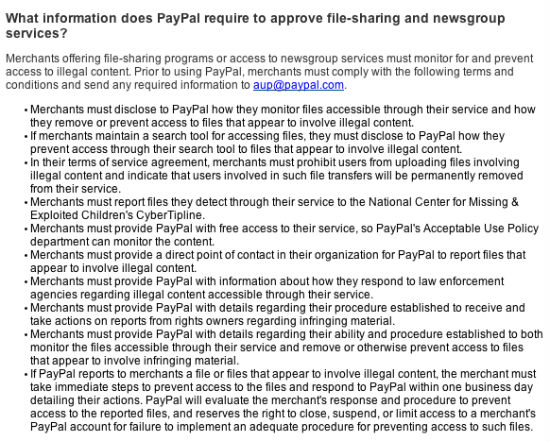 Several of the disconnected Usenet providers confirm that their accounts were suspended because they violated the above terms. However, at least one of the affected companies said it was never asked for any of the information detailed above, while it clearly indicated that it was operating a Usenet service.

PayPal’s decision is a financial blow to the companies involved. Firstly because customers who prefer to pay through PayPal will take their business elsewhere, and secondly because they lose access to a substantial amount of funds.

TorrentFreak previously reported that several major file-hosting services suffered the same fate as these Usenet providers. Although PayPal was willing to continue doing business with some, the set of demands was too extreme for many file-sharing companies to comply with.

Just how far PayPal is prepared to go was explained to us by Putlocker. The UK-based company had its PayPal account frozen several months ago after it refused to allow the payment provider to snoop on files uploaded by its users.

“They basically wanted access to the backend to monitor all the files being uploaded, and listing all files of users if they wanted, regardless of the privacy setting that the user might have selected,” Putlocker told TorrentFreak.

“This is a complete invasion of privacy on PayPal’s part, as it’s none of their business what files users keep in their account. We have a solid abuse handling policy already, and we don’t feel a 3rd party company has any business snooping on our users,” the company added.

MediaFire, another large cyberlocker, also said it stopped accepting PayPal after the company was unable to reach an agreement with the payment company.

While there are still file-hosting services and Usenet providers that accept PayPal payments, this number is expected to decline further in the months to come. It is clear that PayPal’s new policies are in part the result of the copyright lobby. The question is, where will PayPal draw the line?