On Tuesday we reported that several YouTube channels had all their videos blocked worldwide. This included those belonging to MIT OpenCourseWare,’ the ‘Blender Foundation,’ and many others.

The error message that was displayed typically appears for copyright reasons. However, in this case, the problem was more complicated, related to a new license agreement, among other things.

While some prominent channels have now been restored, others still face similar issues. The people at Human Beatbox, for example, tell us that they are experiencing the same problem, which at the time of writing is still not fixed.

YouTube simply informed them that its a “technical issue” which the engineers are trying to resolve. Meanwhile, all videos of theirs and many other channels have been inaccessible for nearly a week…

Whatever the problem is, it’s clearly a ‘mistake’ of epic proportions.

While YouTube probably has no intention to ‘censor’ these channels, it shows what can go wrong if creators put their faith in the hands of a single service. A service they have no control over at all, which removes your content, erroneously or not.

Luckily there are some alternatives that put creators in control again. PeerTube is one of these options.

When the Blender Foundation had all its videos blocked by YouTube earlier this week, a decision was taken to give this alternative a try. In a matter of hours, Blender had a fully operational streaming site, one which they had complete control over.

This prompted TF to take a closer look at PeerTube and what it has to offer. 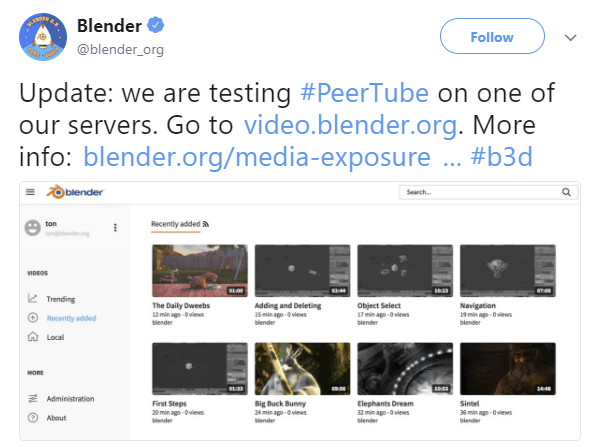 Put simply, PeerTube allows anyone to set up their own video streaming site. This can run independently, but it can also be linked, or federated, with other PeerTube instances to create a broader reach. All with P2P steaming support.

The first version of PeerTube launched last year. It’s operated by the small French non-profit organization Framasoft, and thus far it hasn’t really broken through in English-speaking countries. The Blender Foundation’s problems, while very unfortunate, may change that.

“Blender’s example illustrates our main goal: autonomy, independence from external platforms. When you centralize videos and attention, you gain power over the users. Our approach goes the other way,” Framasoft’s Pouhiou tells TF.

PeerTube comes with built-in WebTorrent support. This means that viewers also contribute their bandwidth, which can come in handy if a video goes viral.

To ‘federate’ with other PeerTube instances, the software uses the ActivityPub protocol, which is also used by the popular social networking software Mastodon. This helps to grow the video library if needed, but it’s entirely optional.

“Federation allows diversity in the governances: each PeerTube Instance Hoster can determine their own set of rules, their settings, their moderation policy, etcetera,” Pouhiou says.

The idea behind PeerTube is to let creators regain control over their content. This helps to avoid censorship in the broadest sense of the word, and also “problems” that block videos for days on end.

It’s this spirit that also drives the developers to make the software entirely free and open.

“To us, it is really about taking back the web into our own hands. We have a joke about the ‘Power to the people’ song of John Lennon: PeerTube is kind of ‘Software to the people’,” Pouhiou tells us.

“That’s why PeerTube has to be Free-Libre software: not even we should be able to ‘close’ the code, it would give us way too much power, which we don’t want.”

Of course, there are plenty of downsides to alternatives like PeerTube. For one, in terms of costs, they are not free to operate. Even though WebTorrent can limit the bandwidth bill to a degree, it requires hosting and some technical skills.

Monetizing PeerTube videos will also require more work. You can’t just click a button and magically start earning money. And then there’s the issue of reaching a wide audience, which may be harder for creators who are ‘locked’ into external services.

That said, for outfits such as Blender and MIT OpenSourceWare which are non-profit and have their own sites which people know how to find, it makes a lot of sense.

At the least, everyone who relies on external platforms might want to stop and think for a minute if they really want to put all their eggs in someone else’s basket.

More information on PeerTube can be found on the official site. The company recently launched a crowdfunding campaign to ensure continued development, which has raised over €20,000 at the time of writing.