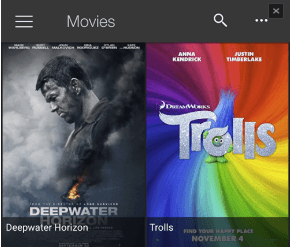 In recent years, a group of select companies have pressured hundreds of thousands of alleged pirates to pay significant settlement fees, or face legal repercussions.

Traditionally, the companies go after BitTorrent users, as they are easy to track down by their IP-addresses. In Hawaii, however, a newly filed case adds a twist to this scheme.

The studios ME2 Productions and Headhunter, who own the rights to the movies ‘Mechanic: Resurrection‘ and ‘A Family Man‘ respectively, are suing an employee of a phone store who allegedly promoted and installed the ‘pirate’ application Showbox on a customer’s device.

Showbox is a popular movie and TV-show streaming application that’s particularly popular among mobile Android users. The app is capable of streaming torrents and works on a wide variety of devices.

While it can be used to stream legitimate content, many people use it to stream copyrighted works. In fact, the application itself displays this infringing use on its homepage, showing off pirated movies.

In a complaint filed at the US District Court of Hawaii, the studios accuse local resident Taylor Wolf of promoting Showbox and its infringing uses.

According to the studios, Wolf works at the Verizon-branded phone store Victra, where she helped customers set up and install phones, tablets and other devices. In doing so, the employee allegedly recommended the Showbox application.

“The Defendant promoted the software application Show Box to said members of the general public, including Kazzandra Pokini,” the complaint reads, adding that Wolf installed the Showbox app on the customer’s tablet, so she could watch pirated content.

The movie studios note that the defendant told the customer in question that her tablet could be used to watch free movies. The employee allegedly installed the Showbox app on the device in the store and showed the customer how to use it.

“Defendant knew that the Show Box app would cause Kazzandra Pokini to make copies of copyrighted content in violation of copyright laws of the United States,” the complaint adds.

The lawsuit is unique in the sense that the studios are going after someone who’s not directly accused of sharing their films. In the traditional lawsuits, they go after the people who share their work.

The complaint doesn’t mention why they chose this tactic. One option is that they initially went after the customer, who then pointed ME2 and Headhunter toward the phone store employee.

Neither studio is new to the piracy lawsuit game. ME2 is connected to Millennium Films and Headhunter is an affiliate of Voltage Pictures, one of the pioneers of so-called copyright trolling cases in the US.

As in most other cases, the copyright holders demand a preliminary injunction to stop Wolf from engaging in any infringing activities, as well as statutory damages, which theoretically can go up to $150,000 per pirated film, but are usually settled for a fraction of that.

A copy of the complaint filed against Taylor Wolf at the US District Court of Hawaii is available here (pdf).