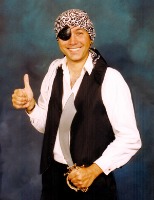 For decades the debate over piracy has raged, with bands and their recording industry paymasters on one side and large swathes of the public on the other. Throughout, however, there have been those prepared to recognize that things aren’t necessarily black and white.

Over the years, many people have argued that access to free music has helped them broaden their musical horizons, dabbling in new genres and discovering new bands. This, they argue, would have been a prohibitively expensive proposition if purchases were forced on a trial and error basis.

Of course, many labels and bands believe that piracy amounts to theft, but some are prepared to put their heads above the parapet with an opinion that doesn’t necessarily tow the party line.

Formed in 1977 in Sheffield, England, rock band Def Leppard have sold more than 100 million records worldwide and have two RIAA diamond certificated albums to their name. But unlike Metallica who have sold a total of 116 million records and were famous for destroying Napster, Def Leppard’s attitude to piracy is entirely more friendly.

In an interview with Ultimate Classic Rock, Def Leppard guitarist Vivian Campbell has been describing why he believes piracy has its upsides, particularly for enduring bands that are still trying to broaden their horizons.

“The way the band works is quite extraordinary. In recent years, we’ve been really fortunate that we’ve seen this new surge in our popularity. For the most part, that’s fueled by younger people coming to the shows,” Campbell said.

“We’ve been seeing it for the last 10, 12 or 15 years, you’d notice younger kids in the audience, but especially in the last couple of years, it’s grown exponentially. I really do believe that this is the upside of music piracy.”

Def Leppard celebrate their 40th anniversary this year, and the fact that they’re still releasing music and attracting a new audience is a real achievement for a band whose original fans only had access to vinyl and cassette tapes. But Campbell says the band isn’t negatively affected by new technology, nor people using it to obtain their content for free.

“You know, people bemoan the fact that you can’t sell records anymore, but for a band like Def Leppard at least, there is a silver lining in the fact that our music is reaching a whole new audience, and that audience is excited to hear it, and they’re coming to the shows. It’s been fantastic,” he said.

While packing out events is every band’s dream, Campbell believes that the enthusiasm these fresh fans bring to the shows is actually helping the band to improve.

“There’s a whole new energy around Leppard, in fact. I think we’re playing better than we ever have. Which you’d like to think anyway. They always say that musicians, unlike athletes, you’re supposed to get better.

“I’m not sure that anyone other than the band really notices, but I notice it and I know that the other guys do too. When I play ‘Rock of Ages’ for the 3,000,000 time, it’s not the song that excites me, it’s the energy from the audience. That’s what really lifts our performance. When you’ve got a more youthful audience coming to your shows, it only goes in one direction,” he concludes.

The thought of hundreds or even thousands of enthusiastic young pirates energizing an aging Def Leppard to the band’s delight is a real novelty. However, with so many channels for music consumption available today, are these new followers necessarily pirates?

One only has to visit Def Leppard’s official YouTube channel to see that despite being born in the late fifties and early sixties, the band are still regularly posting new content to keep fans up to date. So, given the consumption habits of young people these days, YouTube seems a more likely driver of new fans than torrents, for example.

That being said, Def Leppard are still humming along nicely on The Pirate Bay. The site lists a couple of hundred torrents, some uploaded more recently, some many years ago, including full albums, videos, and even entire discographies.

Arrr, we be Def Leppaaaaaard 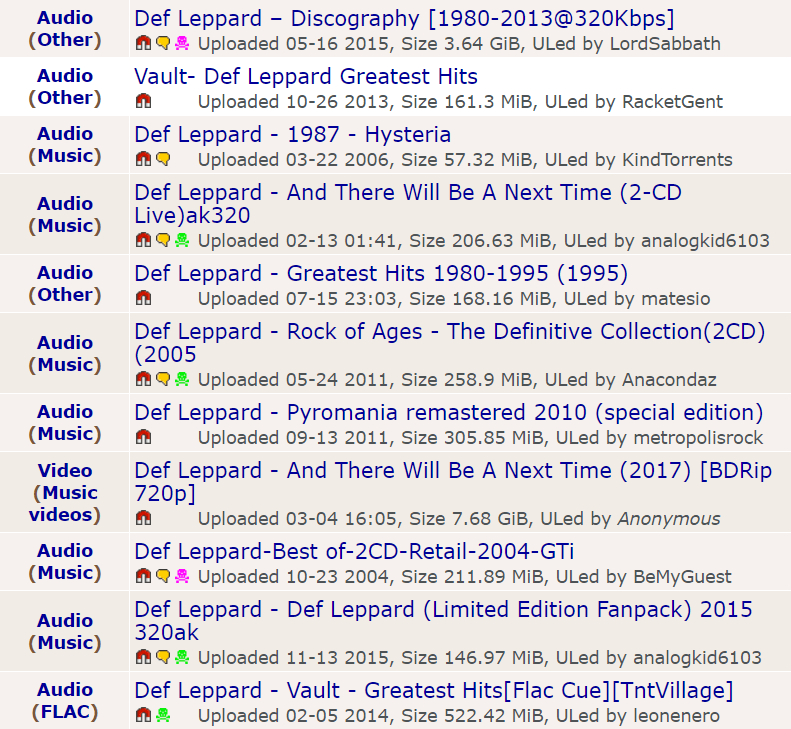 Interestingly, Campbell hasn’t changed his public opinion on piracy for more than a decade. Back in 2007 he was saying similar things, and in 2011 he admitted that there were plenty of “kids out there” with the entire Def Leppard collection on their iPods.

“I am pretty sure they didn’t all pay for it. But, maybe those same kids will buy a ticket and come to a concert,” he said.

“We do not expect to sell a lot of records, we are just thankful to have people listening to our music. That is more important than having people pay for it. It will monetize itself later down the line.”

With sites like YouTube perhaps driving more traffic to bands like Def Leppard than pure piracy these days (and even diverting people away from piracy itself), it’s interesting to note that there’s still controversy around people getting paid for music.

With torrent sites slowly dropping off the record labels’ hitlists, one is much more likely to hear them criticizing YouTube itself for not giving the industry a fair deal.

Still, bands like Def Leppard seem happy, so it’s not all bad news.