In the early days of file-sharing the demise of a large pirate site or service would mean just that. The shutters would come down and users would migrate to new homes – story over.

In more recent times, the situation has become more fluid. The closure of a pirate site often means that identically named or at least similarly presented platforms appear as reincarnations, replacements, or simply the next big thing.

That’s why we’re reporting today on the closure of Zone-Telechargement (ZT), one of the most popular French-language pirate sites, almost six years after it was first ‘permanently’ shut down.

After being founded in 2011, ZT grew to become one of France’s most-visited sites overall with millions of visitors every month. Offering a wide variety of pirated content, including movies, TV shows, games and music, the site’s domain was once the 11th most popular in France. But in 2016, ZT ran into serious trouble.

Following complaints from copyright holders, the French Gendarmerie and Andorran police arrested seven people as part of an operation to shut ZT down. Within hours the site flickered back to life (at least in a limited fashion) and over the years, several platforms with the same name attempted to emulate the original.

Bizarrely, at least one of these was run by an anti-piracy company but others preferred a more traditional ‘pirate’ business model, attracting blocking measures by rightsholders.

On Monday, visitors to some of the most successful ‘replacement’ domains (zone-telechargement.cam and zt-za.net, for example) found themselves redirected to an announcement revealing that ZT had pulled down the curtain once again.

“Hello everyone. It is on these few lines that we announce the closure of the ZT site. Yes that’s the end no joke, not everything is eternal,” the message reads.

“Thank you all without exception, they were very good times spent sharing on ZT. We would like to thank everyone who took part in this adventure for their loyalty, their support, and those who made ZT, the download directory. We hope everyone appreciates.”

Specific domains aren’t listed on the platform but the announcement states that all old and new domains connected with the platform will be closed. For good measure, the site’s operators say they will “completely destroy” the database and there will be no recovery or reincarnation, meaning that around 11 million monthly users will be affected.

Tirexo Says It Will Also Shut Down

In an announcement Sunday, the operators of popular streaming site Tirexo revealed that they too will shut down. The closure is expected to take place in the next few days but the announcement carries a similar message to ZT – thanks to everyone, but the show is over.

“The Tirexo adventure ends here. Thank you for everything. You can rage, yell, insult us (yes, yes, you’re entitled to that, I had to remove comments, it hurt my heart) but it won’t take anything away from what we’ve done for us and you until now. Bye,” the message reads.

In the meantime, the big questions remain unanswered: Why have the sites shut down now and were they under pressure?

When pirate sites suddenly shut down in France, anti-piracy groups ALPA and SACEM are often among the main suspects. French journalist Tristan Brossat says that in response to his inquiries, ALPA responded: “No comments at this stage” but what we know already is that ZT and Tirexo were at the top of ALPA’s priority list.

In a report published last year titled ‘Illegal consumption of videos in France’ (pdf), ALPA listed ZT and Tirexo-branded domains in first and third positions in its ‘illegal site’ list. 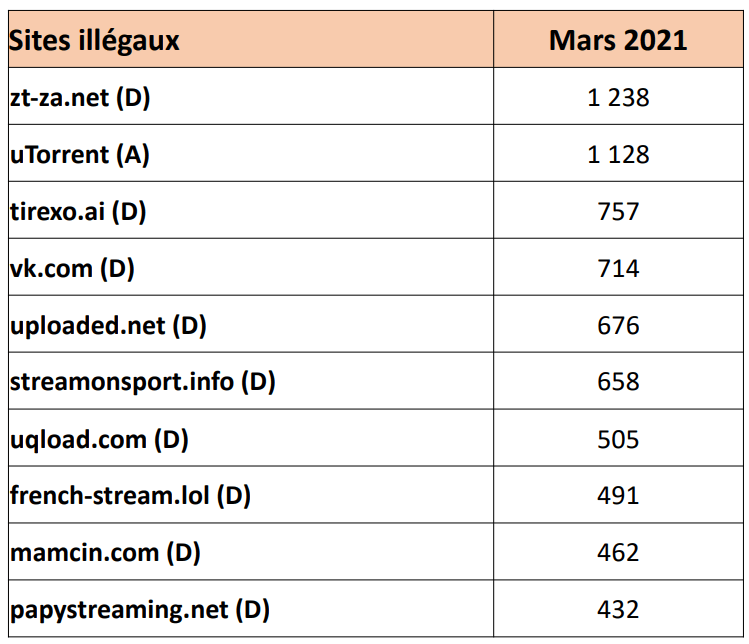 If any group takes responsibility for the closures, we’ll publish an update here.

Determining which domains will fall out of use for both sites will hopefully become easier in the coming days. Google is awash with results for similarly named platforms meaning that these pirate ‘brands’ will continue in the months and years to come, even if the ‘real’ sites have long since been retired.

Update 28/04: The Alliance for Creativity and Entertainment has confirmed it was behind the shutdown of both sites. Official announcement as follows:

The Alliance for Creativity and Entertainment (ACE), the world’s leading coalition dedicated to protecting the legal ecosystem and reducing digital piracy, today announced it has forced Tirexo and Zone-Telechargement to close down. These sites are two of the largest piracy services operated out of North Africa with combined traffic reaching over 31 million monthly visits, mainly from French-speaking countries. Both operators were identified and approached by ACE and shortly after, closed their services.

ACE has yet to consider the matter resolved and continues negotiations with the operators until a satisfactory settlement is achieved.

Operating from Morocco, Tirexo was the second most visited infringing service in France and the number one illegal streaming service in France. In March 2022, Tirexo attracted 18.87 million visits according to SimilarWeb. The service offered access to 131,000 movie titles and 34,000 TV series episodes, affecting all ACE members

Zone-Telechargement, a service operating from Tunisia, was the third most visited infringing service in France and was a downloading, linking, and streaming website. In March 2022, it attracted 11.36 million visits according to SimilarWeb. The service offered access to 46,000 movie titles and 11,500 TV series episodes, affecting all ACE members.

“This successful enforcement action against pirates in North Africa demonstrates ACE’s ability to utilize whatever tools are required to protect the creative ecosystem and our dedication to reducing piracy throughout the region,” said Jan van Voorn, Executive Vice President and Chief of Global Content Protection for the Motion Picture Association.

More operators of pirate services are identified in North-African countries and ACE is preparing future actions.