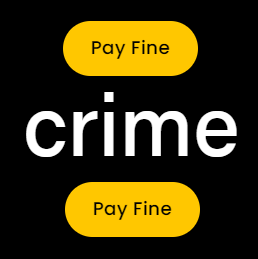 The Digital Economy Act 2017 was the government’s attempt at creating a better, safer internet for citizens in the UK.

It included an amendment to the Copyright, Designs and Patent Act that raised the maximum sentence for online infringement to 10 years in prison, with a basic threshold of simply exposing a copyright owner “to a risk of loss“.

This meant that anyone downloading and sharing a single song or a single movie using BitTorrent became criminals in the eyes of the law. For a country that routinely closes home burglary investigations within hours, criminalizing a few more million people was never going to end well.

The UK’s Open Rights Group had tried to reason with the government, noting that none of the UK creative industries had advocated for pursuing individual file-sharers as criminals but by allowing that, the government would expose citizens to a specific risk.

[A]busive copyright owners will be able to substantiate that file sharing is a criminal matter, punishable by way of a custodial sentence. This would in particular fuel the activities of “copyright trolls”.

The term “copyright troll” is often applied to companies that monitor file-sharing networks, collect IP addresses they claim are sharing movies, and compel ISPs to hand over the identities related to those IP addresses. They then send letters claiming that legal action in the civil courts will follow, should the recipient (including innocent billpayers) refuse to pay a considerable financial sum.

Similar operations have existed in the UK for over 15 years but more recently have abandoned pornography in favor of regular movies. In September 2021, we reported that US movie company Voltage Holdings had begun sending demands to Virgin Media customers, claiming they had infringed their rights in the movie ‘Ava’ via BitTorrent networks.

While these letters are unpleasant to receive, under copyright law they are entirely legal and if the person named in the letter did indeed infringe the movie company’s rights, settling a case might be the sensible course of action. That being said, over time this particular project has taken several unusual turns that bring to mind the warnings of the Open Rights Group and the consequences of criminalizing petty file-sharers.

As detailed in our previous reporting, Voltage Holdings is a member of FACT Administration LLP, a UK corporate structure behind the latest settlement scheme.

A division of the Federation Against Copyright Theft (FACT Worldwide) and FACT chief Kieron Sharp are officers in the LLP and are now playing a leading role. FACT, under various corporate structures, has built a reputation for pursuing large-scale infringers since the 1980s.

They are also the creators of the classic yet mercilessly parodied ‘Piracy, It’s a Crime’ anti-piracy ad but their recent expansion into the cash settlement market is considerably less amusing.

When Voltage first went to the High Court requesting the identities of Virgin Media users, they were represented by Lewis Silkin LLP. Subsequent ‘pay up’ letters were also handled by the law firm which, for the protection of the public, is regulated by the Solicitors Regulatory Authority. Documents shared with TorrentFreak indicate that Lewis Silkin has now been removed.

As part of communication with people who have thus far refused to pay a settlement, Virgin Media bill payers are being advised to communicate with Voltage Holdings directly, via FACT Administration LLP at their shared virtual office address in London. The letter reiterates that the matter relates to infringement of copyright under civil law.

Since the file-sharing is unlawful, Voltage Holdings LLC is entitled to bring court proceedings against you if it can show on the balance of probabilities that you are the person who engaged in the file-sharing or if you authorised or allowed someone else to do so using your broadband connection. This claim would be brought in a specialist civil court called the Intellectual Property Enterprise court, where liability is determined on the balance of probabilities

At this stage, only the removal of the law firm and related protections raises more concerns than those usually present in such cases. However, the letter also includes a link to a website that really steps up the pressure. It is run by FACT Administration LLP and its services are provided by FACT Worldwide Ltd, according to its ‘Modern Slavery‘ statement.

Piracy is a Crime

To be absolutely clear, the website linked in the letter seems to accurately state the law and the legal position of those encouraged to view it. However, it paints an extremely intimidating picture for ordinary members of the public dealing with scary letters that they are unlikely to fully understand, without help from an expensive lawyer. 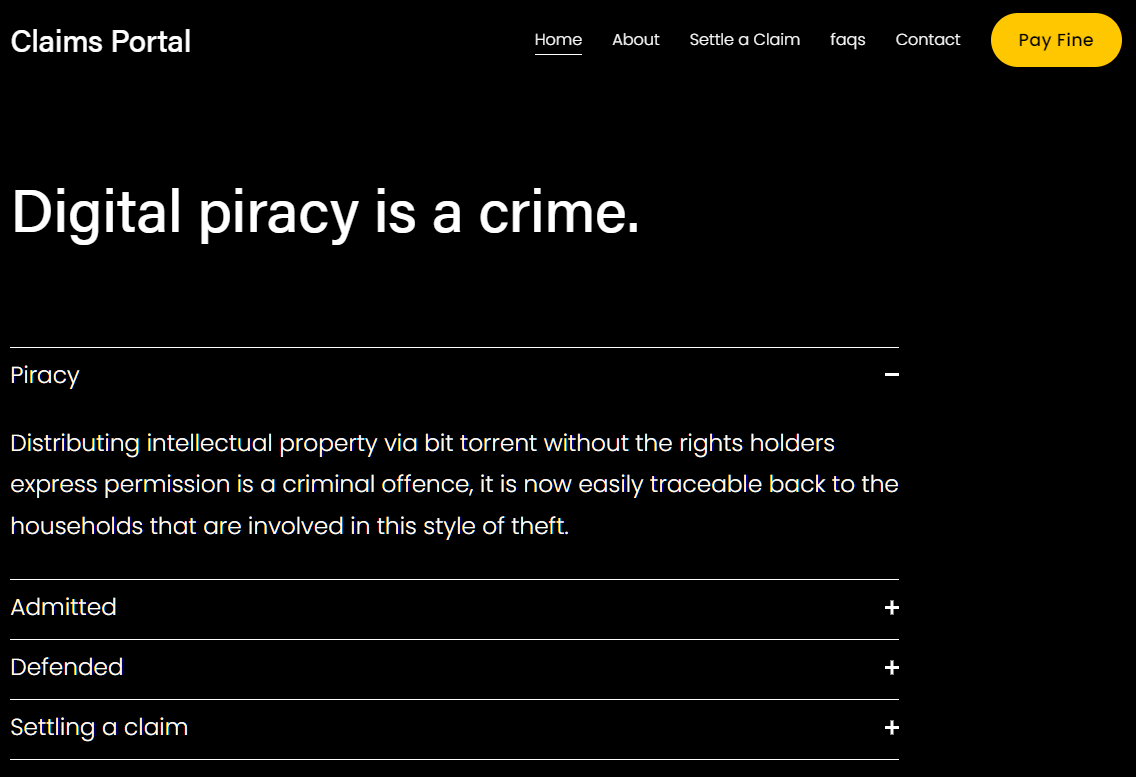 Right off the bat, people accused of piracy via BitTorrent (i.e the downloading/sharing of the movie ‘Ava’) are advised that “distributing intellectual property via bit torrent without the rights holders express permission is a criminal offence, it is now easily traceable back to the households that are involved in this style of theft.”

The first key point is that the above statement is true, as per the Digital Economy Act. The second is that the statement is obviously directed at family homes, not commercial infringers. The government criminalized the sharing of one movie, therefore someone in your home is a criminal, it effectively reads.

The third point is that many people can live in a household and the named bill payer is not necessarily the infringer. If, however, the bill payer can convince Voltage/FACT they did nothing wrong, they claim the matter will be dropped – good luck with that.

But what if someone wants to admit civil liability and settle? Good luck with that too.

Admitting Civil Liability: How About That Crime Again?

Given that the main purpose of settlement letters is to get people to pay up, the next section on the Fact-Admin.org settlement portal covers a scenario where the recipient wants to accept civil liability. To a regular Virgin Media customer and letter recipient, it is likely to prove bewildering.

“Admission of liability does not mean that you are not guilty of committing a crime. Digital piracy is illegal, and both joint civil and criminal proceedings are being taken against individuals in the United Kingdom,” it reads.

The clear message here is that people who are prepared to settle a civil claim can still be prosecuted under criminal law too – i.e paying money in a civil matter does not make a crime go away. But what of the government’s assurances, before the passing of the Digital Economy Act, that the police would not be knocking on the doors of file-sharers?

BitTorrent ‘Criminals’ Could Be Prosecuted Privately

The reality is that police won’t be kicking down doors over a movie but FACT Administration and the various companies of the Federation Against Copyright Theft have an answer for that too.

If the Crown Prosecution Service feels that pursuing a criminal case over one movie isn’t in the public interest, that’s just fine. Because FACT have the option to do what they regularly do against commercial-scale pirates – pursue a private criminal prosecution, run by them, funded by them. 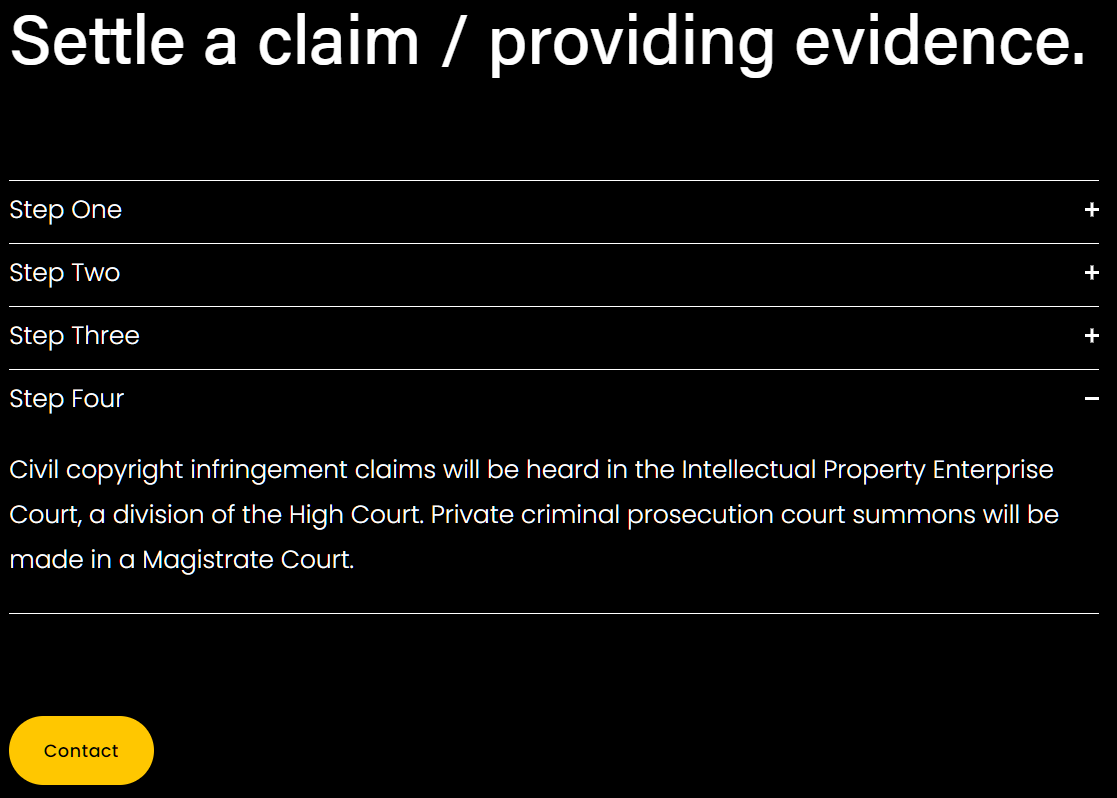 “Settling a claim out of court is at the discretion of the rights holder, whom may choose to prosecute criminally, depending on the flagrancy of the infringement,” the settlement portal reads.

“Civil copyright infringement claims will be heard in the Intellectual Property Enterprise Court, a division of the High Court. Private criminal prosecution court summons will be made in a Magistrate Court.”

It’s also worth mentioning that Hatton and Berkeley, a business entity that is also involved in this settlement project, previously advertised the usefulness of an LLP structure (i.e FACT Administration LLP) to mitigate risks to rightsholders, should copyright litigation go badly for them.

Who Better To Deal With Criminals Than Former Police Officers?

While the above might sound scary, it’s important to note that every detail of this settlement scheme appears to be both accurate and entirely legal, and there are good reasons for that. For example, take the letters being received by people who, up until now, have declined to settle their case in respect of the movie Ava.

They are signed by Tony Nash, who identifies as the Managing Partner of FACT Administration LLP. Nash is a former police commander of the London borough of Newham who later launched My Private Bobby, a subscription-based private police force in the UK.

Kieron Sharp, the head of FACT and a named member of FACT Administration, is a former senior City of London Police detective and former head of the economic crime team at Interpol. Other FACT employees with police careers behind them can be found on the company’s website.

FACT is also closely affiliated with the City of London Police’s, Police Intellectual Property Crime Unit (PIPCU), something regularly documented in hundreds of news reports. Given these connections, the pressure on letter recipients to settle is bound to increase, especially given the liberal references to criminal law, private prosecutions, and a direct link to PIPCU on the portal’s ‘About’ page.

It’s important to stress that letters sent to alleged file-sharers only reference civil law. However, the website that letter recipients are directed to also makes extremely clear references to criminal law and potential criminal liability, not only for those who refuse to settle, but even those who want to. It’s the kind of messaging the Open Rights Group warned about in 2016 but the government did nothing to prevent.

Finally, when we first saw indications of a developing settlement scheme last summer, we predicted that a movie called “The Marksman” was likely to feature at some point.

The settlement portal appears to confirm this, and also references other movies including After We Collided and Run Fight Hide. It’s clear that the companies involved have planned in considerable detail what appears to be a long-term project. It will undoubtedly keep the High Court, internet service providers, and solicitors busy.

Meanwhile, parents will be wondering whether they need to turn informant on their partner, kids, friends or anyone else with access to their wifi. Or if by simply paying up money they just don’t have, life will go back to normal again. Certainly puts the food and fuel bill crisis into perspective, with perfect timing too. 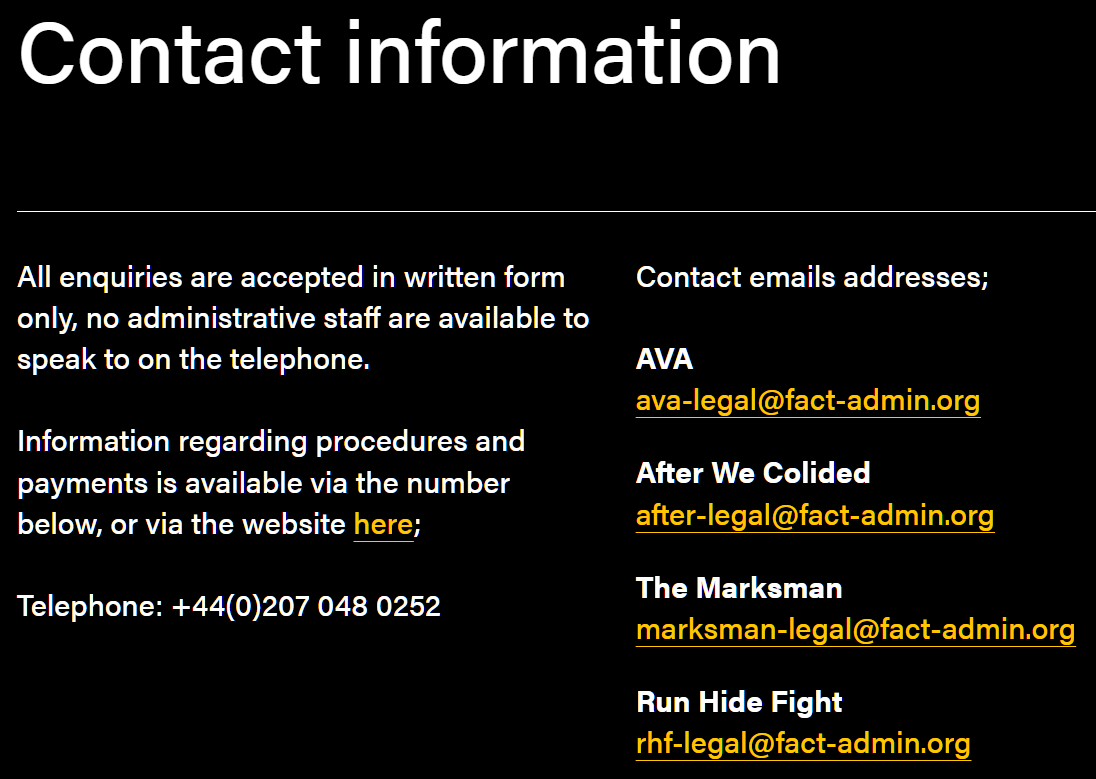