In the years that followed the New Zealand-based entrepreneur cut his ties with the company but Mega continued to expand.

The platform, which has a strong privacy focus, is now the go-to file storage platform for millions of people. Most of these users store perfectly legitimate files on Mega but like many other services of its kind, it’s being abused by pirates as well.

Twice a year Mega publishes a transparency report that reveals the volume of copyright complaints. The latest release shows that in the first quarter of 2022, copyright holders sent 1,187,646 takedown requests.

This is a significant increase compared to previous periods. For example, in the first quarter of 2020 Mega received ‘just’ 264,483 takedown notices.

The higher volume can in part be explained by the fact that the number of files stored on the platform increased from 72 billion to 117 billion in two years. However, the percentage of targeted links also more than doubled, although that’s still relatively tiny at just 0.001% of all files on the service.

“The number of unique takedown requests submitted represents a very small percentage of the total number of files stored on Mega,” the company clarifies. 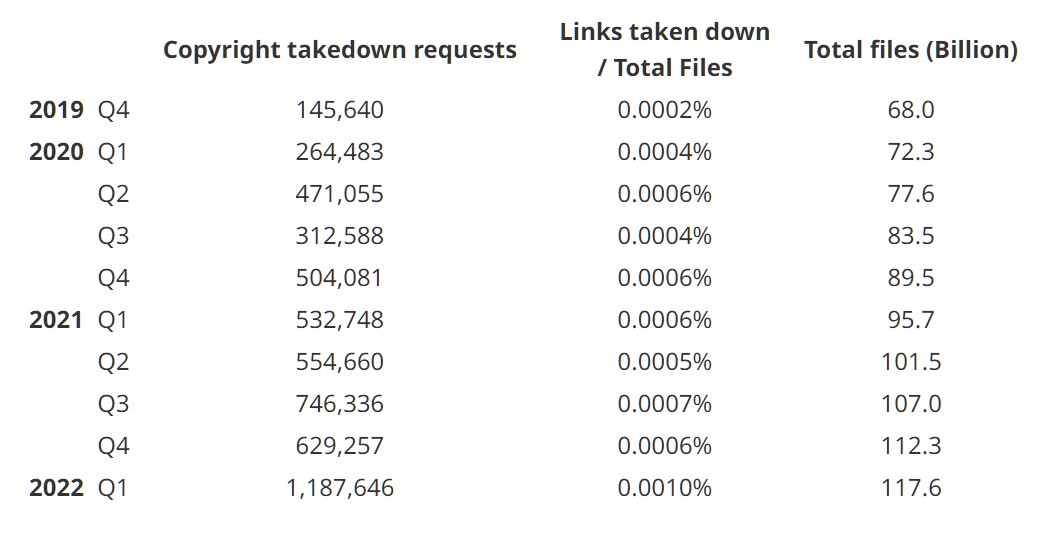 Mega allows its users to submit counternotices if they believe their content was removed in error. During the first quarter of the year, only two of these requests came in. This is slightly below the average of the past years.

Mega has a repeat infringer policy when it comes to copyright infringement claims. If a user’s content is targeted with three copyright takedown strikes within six months, their account will be terminated.

In recent years Mega has terminated around two to three thousand users per quarter, which is around 0.001% of the total number of users. Since the company’s launch in 2013, nearly 150,000 users have lost their accounts.

This ironically included its founder Kim Dotcom, whose account was later restored.

While copyright infringers are a problem for Mega, most users have their accounts terminated for sharing objectionable content. The vast majority of these people share Child Sexual Abuse Materials (CSAM).

Over the past quarters, the number of account terminations related to CSAM content is far greater than those for copyright suspensions. These users were all reported to the appropriate authorities. 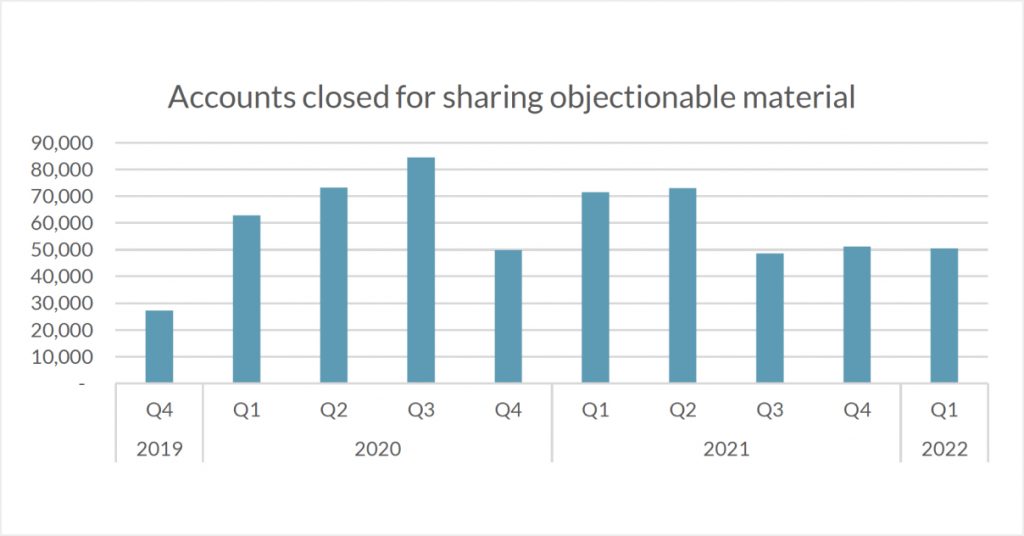 Since Mega’s launch in 2013, hundreds of thousands of people have been booted from the platform after sharing objectionable content.

“During the 9 years to 31st March 2022, Mega has closed 744,000 accounts for sharing objectionable content. Details of every illegal link and of every related account that was closed were provided to the New Zealand Government and relevant international authorities for investigation and prosecution.”

Mega doesn’t proactively share any details of alleged copyright infringers with the authorities or rightsholders. However, with a valid court order, the company can be compelled to share user data, which includes IP-addresses, chats, and other personal information.

“If we think it is necessary or we are obliged by law in any jurisdiction, then we are entitled to give Your Files, Your Chats, any Account Data and any Usage Data to competent authorities, even if those items are encrypted,” Mega notes.