Piracy Should be Tackled With ‘Carrot and Stick’ USPTO Paper Suggests

Over the past years, hundreds of academic piracy studies have been published, all focusing on their own unique angle.

This resulted in a vast body of research that, with some skilled cherry-picking, can support pretty much any argument.

While the individual papers all contribute to the understanding of the piracy ecosystem and how this affects the entertainment industries, the results are often hard to translate into policy.

In an effort to obtain a broader perspective, last year the US Patent and Trade Office (USPTO) put out a proposal for a broad piracy landscape study. This project was awarded to a group of researchers from Chapman University and Carnegie Mellon University, who released their working paper this month.

The study doesn’t research any new topics, but it does a good job of summarizing the existing findings and draws some strong conclusions, uniting opposing views.

In public piracy discussions, you often have two sides. The first, often the rightsholders, stress that stricter enforcement measures are needed. The other side, however, believes that affordable and accessible legal options are the cure to piracy.

The USPTO paper addresses both and concludes that no side is entirely wrong or right.

“Our analysis of the academic literature on anti-piracy strategies shows that firms can reduce piracy by making legal content more available and more appealing,” the researchers write.

“Strategies such as making legal content available on convenient digital channels or reducing the release windows between different releases of the same product are both effective at changing consumption of pirated content.”

Having great legal options alone is not the full answer though. Research has shown that this reduces piracy by 25 percent at most. While this is substantial, there is more that can be done. 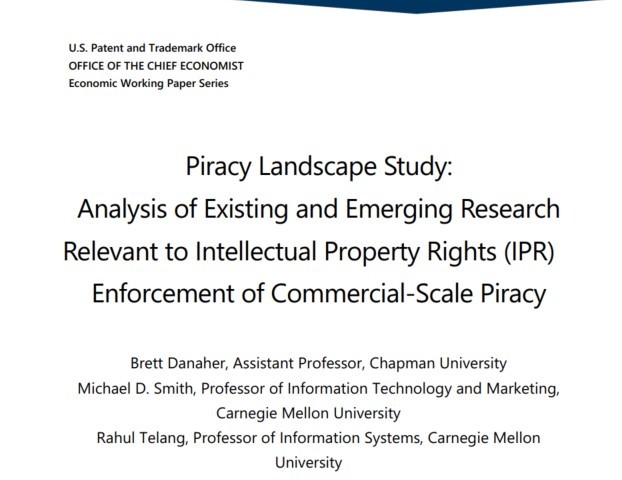 This is where the enforcement side comes in. According to the researchers, the majority of the academic papers show that piracy results in some losses for rightsholders. Enforcement measures can help to limit these losses.

However, the researchers highlight that not all enforcement efforts work well. Blocking a single pirate site, for example, is not believed to be effective. The same is true for stringent anti-piracy laws that are barely enforced.

Strict enforcement works even better when there’s risk involved. This includes the risk of getting caught, but also the risk of running into malware, which may explain the wave of malware-related warnings we’ve seen from copyright holders recently.

But, even when hundreds of pirate sites are blocked and piracy is seen as very risky, legal options should not be ignored. In fact, the researchers suggest that a combination of attractive legal options (carrot) and good enforcement measures (stick) probably works best.

“Making pirated content harder to find is likely to have a larger impact on consumer choice if legal content is readily available in a timely fashion than if the content that consumers want to enjoy is difficult to find on legal channels or is not available until long after it becomes available through piracy,” the paper reads.

This theory also applies in the other direction.

“Similarly, making legal content available on convenient legal services is likely to have a stronger impact on consumer behavior if piracy is perceived as a costly, inconvenient, or risky alternative.”

The overall conclusion is that the combination of a carrot and stick is the way forward. In other words, pairing the most effective enforcement efforts with the most attractive legal offerings is the optimal anti-piracy strategy.

“[T]he most natural conclusion one can draw from the peer-reviewed literature is that the combination of firm strategies to make high-quality legal content readily available and easy to use, and government and private actions to reduce the appeal of pirated content, is the most effective way to reduce piracy’s impact on legal markets.”

While this appears to be a sensible conclusion, this approach is yet to be studied in detail so will be an area for future academic research.

The paper also highlights some further shortcomings of the existing literature. For example, many studies were conducted during a time when most people bought media, while most entertainment consumption is subscription-based now.

While not mentioned in the paper, increased fragmentation in the legal streaming landscape may not be the best way forward, as it can drive people towards piracy sites.

Another area that hasn’t been researched in detail is the effect of piracy on live streaming, including sports. These are all opportunities for future research.