The Pirate Bay is one of the most established brands on the Internet, but this certainly wasn’t the case 13 years ago.

The notorious torrent site was originally founded by Swedish pro-culture organization Piratbyrån, during the summer of 2003.

It was first hosted in Mexico, where Gottfrid Svartholm operated the site on a server owned by the company he was working for at the time. After a few months, it moved to Sweden, where Fredrik Neij ran the site and tracker from a Pentium III 1GHz laptop with 256MB of RAM.

While some of the site’s current users weren’t even born at the time, several of the torrents that were uploaded back then are still available today. This week the site’s longest surviving torrents turn thirteen years old. In other words, they’re teenagers now.

Below are the oldest listed torrents as of this week. An episode of “The High Chaparral” has the honor of being the oldest torrent. The file was originally uploaded on March 25, 2004, and although it lists zero seeders in the search results, there are still several people sharing it. 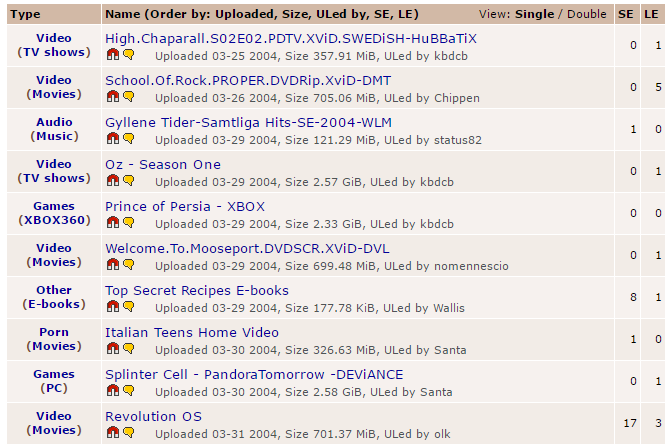 The ‘unofficial’ record hasn’t gone unnoticed to Pirate Bay users. Several commenters refer to the torrent’s achievement as the oldest surviving torrent on the site.

“Well, I guess since this is a part of TPB history i’ll add it to my Raspberry Pi torrent server to seed forever. Hopefully others will do the same,” one person writes in the comment section.

Other torrents that will soon reach teenager status are a copy of the first season of “Oz,” a book with “Top Secret Recipes,” and the “Revolution OS” documentary, which covers the history of Linux, GNU and the free software movement.

What’s most remarkable is that people are still sharing these files after all this time. A torrent only remains available if there’s at least one person sharing it. Over the years millions of torrents have stopped working, but these have weathered all the storms.

To give an idea of how many older torrents are still listed on The Pirate Bay, we looked at one of the site’s most recent database dumps.

Given the iconic status of the “High Chaparral” torrent, it’s not unthinkable that this one will live on to become an adult. That is, if The Pirate Bay itself is still operational in 2022.