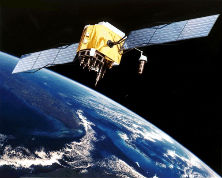 A few days ago we were tipped off about a rather intriguing discussion that’s currently taking place on the the Pirate Parties International (PPI) mailing list. Apparently, the Pirates have big plans to launch a file-sharing site (torrent, we assume) into space.

The Pirate Parties International is the umbrella organization for Pirate Parties worldwide, which are active in nearly 50 countries at the moment. On their mailing list, interesting ideas, links and documents are shared, and a few days ago the idea for an extraterrestrial file-sharing site was born.

Although it is no secret that Sci-Fi fans are well represented in the pirate community, the idea is taken somewhat seriously, both by PPI members and outsiders. Forbes already took notice of the plans and in the PPI members are carefully weighing the pros and cons of their options.

So what are these Pirates up to?

The idea is to get away from current ‘restricted’ hosting facilities where the law of the land applies. Initially, a balloon was opted for as the ideal vessel, but others quickly suggested that an actual satellite would be a more durable solution. To fund the project, crowd-sourcing platforms like Kickstarter were mentioned.

As the discussion moved on the more down-to-earth members mentioned that it might be a good idea to start at sea. This would be a nice fit with the Pirate theme and also slightly more affordable. A remote-controlled sail-boat could easily carry the hosting platform and be shipped outside of territorial waters.

Although there is no consensus yet, boat, balloon then satellite seems to be a logical order of approach.

But will this work?

We would be the last to temper the hopes and dreams of any Pirate, but there are some hurdles to overcome. Money issues aside, it’s not going to be easy to launch a website in space without being bound to the laws of a country or company down below. After all, one needs connectivity, a domain name and an IP-address.

It would be a real shame to have a torrent site up and running in space, but have it disconnected because the bandwidth provider receives a take-down notice. Not to mention the logistics that will be involved with replacing a failing harddisk.

To use a famous Sci-Fi quote: “Anything is possible, but the odds are astronomically against it.”

Encouraged by the recognition from Forbes and the enthusiasm from PPI members, the discussion on what the ideal plan would be continues. And as The Pirate Bay has proven with their Buy Sealand project, raising thousands of dollars is a piece of cake. Time will tell if it’s going to be a homemade balloon, a pirate ship, a satellite, or nothing.

We contacted the PPI with some questions and a request for comment, but haven’t heard back from them at the time of publishing.