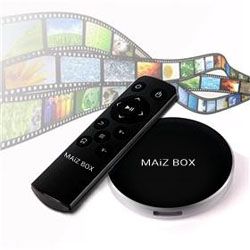 In the UK there are two broad views on copyright infringement, one covering a type that’s usually small and personal and another of varying scales done in the course of a business.

For the purpose of punishments, the latter is much more serious and copyright holders often warn that commercial scale pirates risk significant custodial sentences. Indeed, over the years that has often been the case.

However, a case being reported in Wales this morning is of interest in a number of ways, not least since it involves the current piracy hot topic – set-top devices loaded with Kodi and infriging third-party addons – and large sums of money.

Between June 2014 and March 2016 a man called Daniel Brown was involved in selling piracy-configured set-top devices to the public. He brought the base Android units in from China and filled them with this own ‘pirate’ Kodi build. However, according to Wales Online, this attracted the attention of BSkyB who complained to local police.

Meanwhile, Brown continued selling his devices via his legitimate company, Maiz Limited, which is still active today. Searches of Companies House reveals that Brown is still a director of the company, whose nature of business is listed as “Ready-made interactive leisure and entertainment software development.”

For many in the Kodi scene, the name MAiZ name may ring a bell. For some time, the so-called MAiZ BOX was a device often discussed on forums and Facebook as doing a good job of receiving free TV. However, that was also accompanied by criticizm of its steep £125 price tag.

While success in shifting large numbers of units isn’t referenced in the small company accounts filed by Maiz Limited, it was clearly doing well. Swansea Crown Court heard that between 2014 and 2016 the company generated £371,000, which is a lot even when divided by unit sales of £125 each.

At his trial, Judge Peter Heywood said Brown was “industrious but misguided in some ways” and was “clearly skilled in the use of computer technology”. But despite the large sums of money involved, no custodial sentence was handed down.

Brown was given an 18 months sentence, suspended for two years, and ordered to complete 180 hours of unpaid work. This means that Brown will spend no time in jail provided he meets the terms of his sentencing.

The entrepreneur won’t get away completely though. Brown agreeed to pay almost £20,000 towards his prosecution, at a repayment rate of £800 per month. But somewhat unusually in such cases, no Proceeds of Crime Act orders were made, which suggests that there will be no attempt to recover money made through the business.

Brown’s lenient sentence further undermines the ridiculous claims still circulating in the UK press that Kodi users face up to 10 years in jail for using the devices to stream content in their own homes.

Brown did not immediately respond to TorrentFreak’s requests for comment.