When Spotify launched its first beta in the fall of 2008, we branded it “an alternative to music piracy.”

With the option to stream millions of tracks supported by an occasional ad, or free of ads for a small subscription fee, Spotify appeared to be a serious competitor to music piracy.

In the years that followed Spotify conquered the hearts and minds of many music fans. Currently available in 61 countries, the service has amassed dozens of millions of users. A true success story, one that was in part made possible due to Spotify’s heavy reliance on P2P technology.

In fact, Spotify has long been one of the largest P2P networks on the Internet. When Spotify subscribers play a track in the desktop client, this could come from three sources: a cached file on the computer, one of Spotify’s servers, or from other subscribers through P2P.

In 2011 we reported that of all tracks that were not accessed over the Internet, roughly 80% went through the P2P network. This allowed Spotify to reduced server resources and associated costs, which is a pretty big deal for a startup.

However, the end of the road is coming soon for this massive private sharing network. TorrentFreak has learned that Spotify plans to discontinue its P2P technology altogether, to rely solely on central servers instead.

“We’re gradually phasing out the use of our desktop P2P technology which has helped our users enjoy their music both speedily and seamlessly,” Spotify’s Alison Bonny informs TF.

Where Spotify previously needed P2P to guarantee that all tracks could be played with the lowest lag possible, this is no longer needed. During the months to come Spotify will effectively shut down its P2P servers.

“We’re now at a stage where we can power music delivery through our growing number of servers and ensure our users continue to receive a best-in-class service,” Bonny says.

P2P has been central to Spotify’s success for a variety of reasons. For one, it allowed the service to scale up quickly without having to invest heavily in servers and bandwidth. This must have saved the company millions of dollars per year.

Also, one of the lead engineers since the start is none other than Ludvig Strigeus, the original creator of the BitTorrent client uTorrent. Strigeus sold uTorrent to BitTorrent Inc. in 2006, and some believe that part of this money went into the development of Spotify.

Spotify’s departure from P2P technology marks the end of an era, but to most people the change will simply go unnoticed, just like the fact that they have been sharing tracks with thousands of people from all over the world for years, with permission from the major record labels. 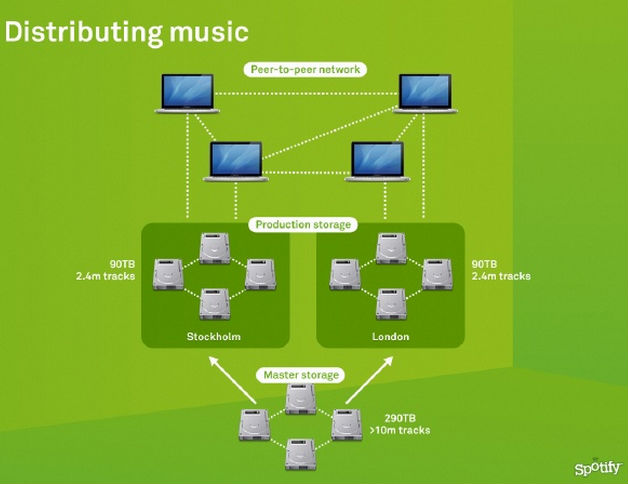