Pirates Switch From Torrents to Streaming and Download Sites

While there haven’t been any breakthroughs in file-sharing technology in recent years, the piracy ecosystem is constantly evolving.

Torrent sites have traditionally been very popular, but according to a new report published by piracy tracking outfit MUSO, direct download and streaming sites have taken over.

Using data sampled from over 200 million devices by a leading data provider, the company compiled a detailed snapshot of the traffic that flowed to various websites last year.

In total MUSO monitored traffic to 14,000 of the largest global piracy websites, which were visited a dazzling 141 billion times over a 12-month period.

While overall visits remained relatively stable, there was a major shift away from torrent sites to more centralized streaming and direct download sites.

“Our data shows a rapid change in piracy behavior, with a large movement away from torrent usage, and growth in web based piracy,” MUSO informs TF.

The tracking company exclusively shared several interesting data points from the report with TorrentFreak. Zooming in on torrent sites it shows a clear downward trend in number of visits.

From January 2015 to December 2015 these sites saw a 24% reduction in monthly visits. There was still plenty of traffic left though, as the average monthly visits hovered around 3 billion, totaling 34.8 billion for the entire year. 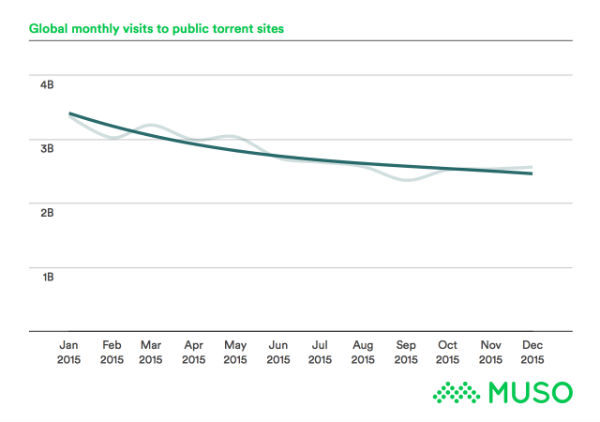 The traffic drop applies globally, with some notable exceptions and variation. In France, for example, visits to torrent sites actually went up.

“Our data can split the above traffic by country, and shows that most countries follow this downward trend. There are however some notable exceptions, such as France, where torrent usage increased throughout the year,” MUSO informs us.

The United States remains the country with the most visits to torrent sites, 3.6 billion per year, followed by India and Russia with 3.3 and 2.7 billion visits respectively.

“Unlike public torrent site usage, private torrent site visits started to increase again during the second half of the year, and ended the year with 8% fewer visits per month,” MUSO explains. 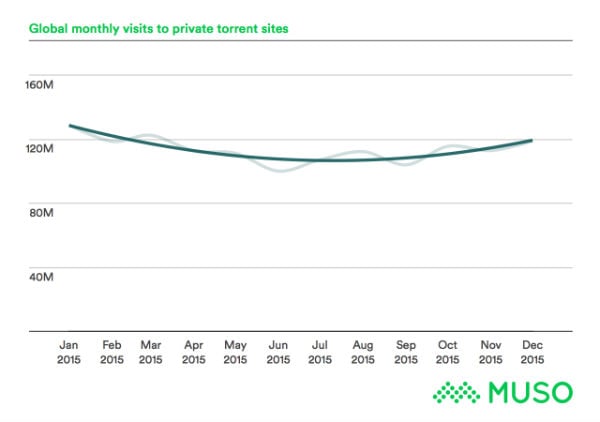 The data is part of a large study into the piracy ecosystem. MUSO publishes two commercial reports today, with the first focusing on music piracy, and the second on film & TV.

Overall, MUSO concludes that the piracy ecosystem is rapidly changing. Over the past year torrent sites lost a big chunk of traffic, but piracy remains relatively flat as the decrease in torrent traffic is offset by an increased interest in other web-based pirate sources.