Police Around Asia Crack Down on Pirate IPTV With Raids & Arrests

While pirate streaming operations around the United States and Europe attract the most headlines, unlicensed IPTV and similar platforms are now mainstream in most parts of the world.

Authorities in the West are tackling this problem using quiet ‘behind-the-scenes’ agreements through to civil litigation and criminal enforcement. The situation in Asia is similar and over the past couple of weeks a number of cases have been made public.

As reported by Japan-based anti-piracy group CODA, authorities in Taiwan carried out an operation through the latter part of January and early February targeting what is described as a “criminal organization” involved in the supply of illegal streams. With assistance from the prosecutor’s office, police, and detective agencies, officers arrested nine people. 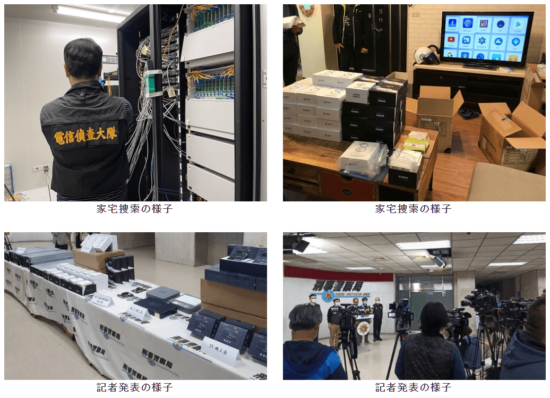 Taiwan established a dedicated team in early 2020 to tackle the illegal streaming of TV shows to pirate devices and since then 18 locations have been searched, resulting in the seizure of hundreds of set-top devices and computer servers. After analysis, it was found that some of the devices provided illegal access to broadcasts from Taiwan and Japan.

“It is believed that the criminal organization deciphered the broadcast signals of each major TV station through network servers installed in domestic telecommunications equipment rooms and sent them to infringing set-top devices via the Internet,” CODA reports.

Over the past several years Thailand’s Department of Special Investigation (DSI) has carried out numerous actions against individuals involved in the supply of pirate IPTV and similar streaming services.

Two Brits and a local were arrested in 2017 under suspicion of violating the rights of the Premier League and in 2019, DSI shut down the country’s most popular pirate site, Movie2free.com, following a request from the Motion Picture Association.

Last weekend, the DSI unit was in action again, raiding five premises linked to the illegal movie streaming. According to Pol Lt Col Korawat, among the items seized were 100 receivers, decoders, satellite dishes, computers, notebooks, hard disks and mobile phones. It’s believed that the equipment was used to supply pirated movies and TV content to the website fwiptv.cc. That site is currently down.

According to the Bangkok Post, the main players behind the streaming operation were not discovered during the raids and the authorities were only able to arrest technicians hired to run the operation.

Fwiptv.cc was reportedly founded in 2012 and was Thailand’s largest broadcaster of pirated movies and sport, including content owned by the Premier League.

Over in Malaysia, a company director behind the operation to supply ‘Long TV’ pirate TV devices to the public pleaded guilty on Monday. According to local reports, the individual was charged with selling the devices and breaching intellectual property rights last September.

“The company, located at I-City, Persiaran Multimedia, Section 7, Shah Alam, Selangor has violated Section 41(1)(ha) of the Copyright Act 1987 for selling any technology or device for the purpose of bypassing any effective technological measures stated under subsection 36A(3) of the same Act,” a statement from the Ministry of Domestic Trade and Consumer Affairs reads.

Last August, Japan’s Agency for Cultural Affairs, a body of the Ministry of Education, Culture, Sports, Science and Technology, hired Hello Kitty to become its Copyright Ambassador. Since then, local anti-piracy group CODA has been releasing educational content featuring the famous character in an effort to keep people away from sources of pirated content.

The video is embedded below and the quiz can be found here.