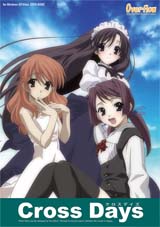 Compatible with some delightful USB ‘hands-free’ devices for experiencing ‘climax scenes’ (NSFW: male and female versions) many preferred to obtain the title via unofficial channels. Those that did were in for quite a shock.

A fake version of the game was widely available on file-sharing networks, but when installed it punished the would-be pirates. After gathering highly personal information from the victim’s computer, accompanied by a screenshot of his or her desktop and what they were doing at the time, the malware uploaded the whole lot to a public website.

It was possible to have the stuff taken down, but at a price. Not only would the victim have to apologize for downloading the ‘game’ for free, but they would also have to pay money to their tormentors.

But, as they say, what goes around, comes around.

According to a Japanese media report, this week two men were arrested on suspicion of creating the Cross Days malware and using it to extort money from victims.

Kenzo Oka, 27, of Tokyo, and an unnamed second man, 20, were arrested earlier this month on suspicion of defrauding several people out payments of around $64 each to have their personal details removed from the website.

While writing computer viruses isn’t a crime in Japan, extorting cash with them is. The pair become the first to be arrested in the country while using a virus as a tool to commit fraud.

In March 2007, we reported on another bizarre piece of Japanese code which taunted file-sharers, threatened to report them to the police and even threatened to kill them.

The author of that code was eventually arrested for breaching copyright – because he used cartoon graphics in the virus without permission.