The Popcorn Time phenomenon took the Internet by storm earlier this year. The software became the subject of hundreds of news articles, as it offered P2P streaming in an easy to use Netflix-style interface.

Overwhelmed by the response the original team quickly retired. However, since the code is open source, many competing forks quickly adopted the project, each taking it in a different direction.

Time4Popcorn is one of the most users reincarnations of Popcorn Time. The team behind the project has introduced several new features to their version, including TV-show listings and Android support.

These changes definitely increased the appeal of the application, but there was a threat lurking around the corner. In common with all other BitTorrent-based software, copyright holders are actively monitoring the activities of people who pirate their works.

This already resulted in fines for German users of a Popcorn Time fork, but users in the United States and other regions where copyright trolls are active face the same risk. To counter this “threat” the Time4Popcorn team decided to implement a VPN feature, for free.

“Throughout these last months we realized that making the ultimate watching experience for everyone is important. However, something that is even more important to us is that everyone will be able to get this experience without risking themselves,” the Time4Popcorn team tells TorrentFreak.

The news about the settlement requests prompted the developers to include a VPN option to anonymize use of their client.

This week the feature was added to the latest 4.2 Alpha release. By clicking a lock icon users can quickly connect and disconnect the built-in protection. Although it may take some more time before a stream starts playing, it appears to work just fine.

“Thanks to the new VPN feature everyone from anywhere in the world will be able to use Popcorn Time, worry free. That makes us very happy,” the team tells us. 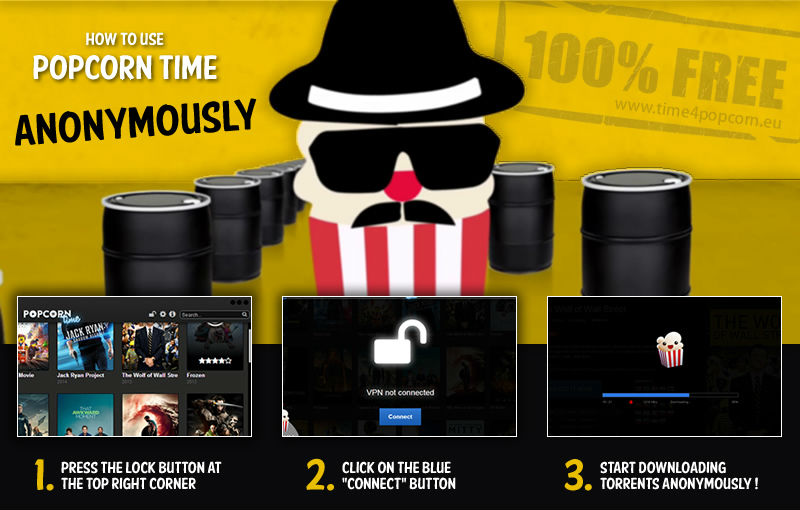 The VPN itself is not run by the Popcorn Time team. Instead, they came to an agreement with the VPN provider Kebrum, who are offering their services for free. TorrentFreak reached out to Kebrum to find out why they agreed to join the project.

“There are not a lot of opportunities in life to be a part of a revolution and we have recognized this opportunity. One of the main goals of the company is to bring back the anonymity to the internet,” Kebrum’s Martin tells us.

“From our experience and the expected usage stats provided by Popcorn Time, we believe that the resources we allocated for Popcorn Time users should be enough in order to give a good and fast download experience. Our servers are prepared to handle the traffic,” Martin says.

As with all other features, the VPN functionality is released as open source under a GPL-V3 license.

The Time4Popcorn team plans to inform its users about the new VPN feature in the coming days, and once it’s included in the stable release older versions will update automatically.