With millions of monthly visitors, DonTorrent is a force to be reckoned with. The site is particularly popular in Spain and offers links to a curated selection of torrents.

DonTorrent regularly switches domain names to evade ISP blocking efforts, a common practice among pirate sites. It is currently operating from dontorrent.cat and also has a dedicated .onion address so it can be accessed anonymously through the Tor network.

In addition to site blocking, there are other potential risks on the horizon. Anti-piracy coalition ACE is following the site closely. The group previously asked Cloudflare to share all details it holds on the operators of the site, presumably in advance of legal action.

ACE tried to obtain this information through a subpoena submitted by MPA’s Chief of Global Content Protection Jan Van Voorn. This is a common practice nowadays, which – in some cases – helps ACE and its members to obtain useful intelligence.

Whether Cloudflare shared anything useful on DonTorrent is unknown. However, the site is certainly aware of ACE and MPA’s interest since it’s openly taunting the anti-piracy collectives. According to the site’s disclaimer, DonTorrent is owned by MPA content protection boss Jan Van Voorn. 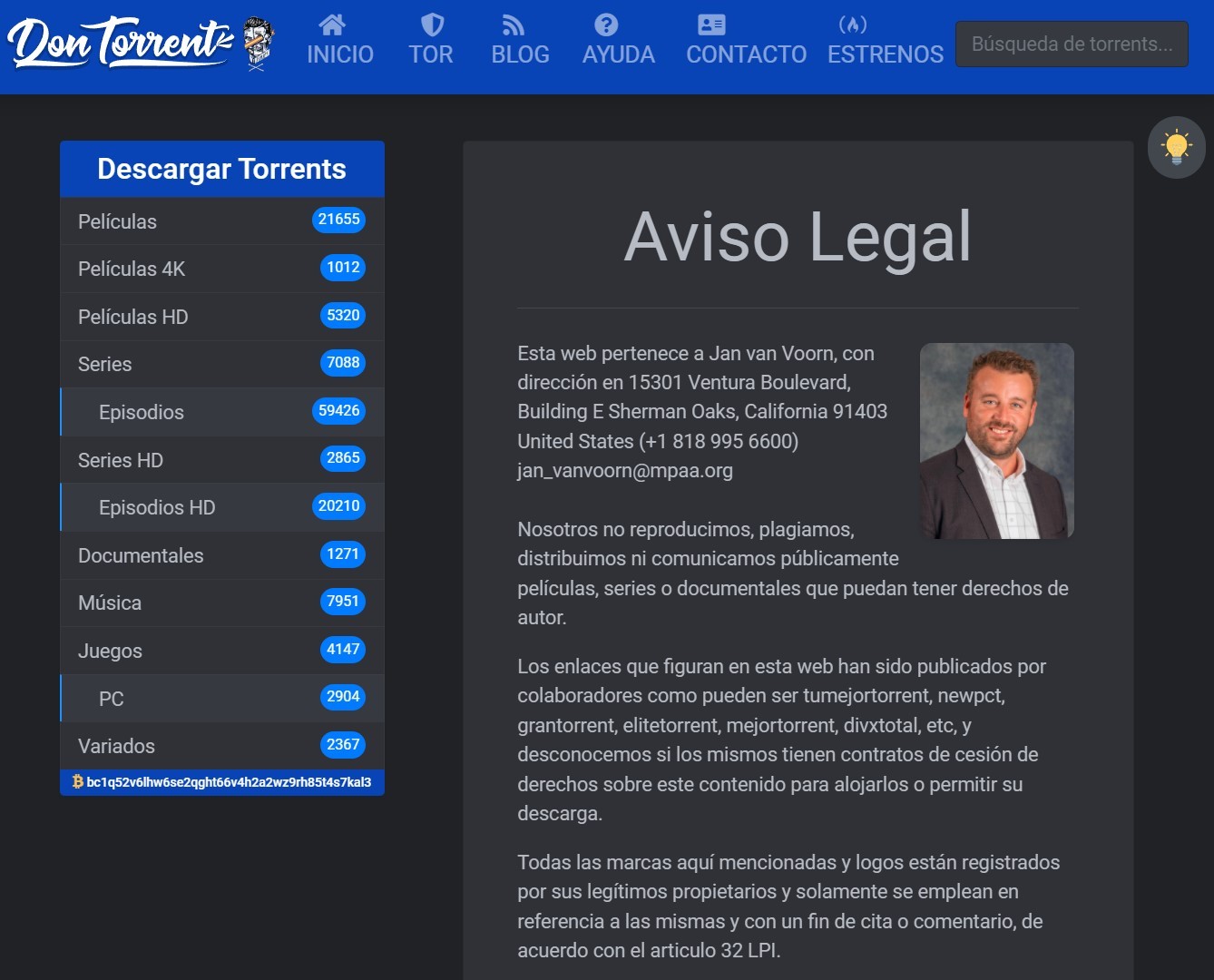 This message isn’t a belated April fools prank, as it has already been in place for weeks. That said, it’s obviously meant as a joke of some kind, as the MPA and Van Voorn are on the other side of the piracy spectrum.

The notice is a bold move nonetheless and we assume that ACE and the MPA will only become more determined to find out who’s really behind the scenes. And they may get some help from Spanish law enforcement.

Two weeks ago, MPA Chairman Charles Rivkin met with Francisco Pardo, the Director General of the Spanish Police, who committed to protecting rightsholders from online piracy.

“Director General Francisco Pardo Piqueras told me today that the film/TV/streaming industry needs to be protected from piracy because it ‘creates dreams, hope, and happiness, and that… is magic’,” Rivkin tweeted in response.

For now, the Spanish torrent site appears to feel pretty safe. Before publishing, we tried to find out what motivated DonTorrent’s operators to put Van Voorn in change but we didn’t hear back.

Update: DonTorrent informs TorrentFreak that it decided to add Mr. Van Voorn as the owner of the site because he sent a DMCA notice to Google for the official Chrome extension. DonTorrent notes that the site is simply a hobby project.