In recent years, so-called copyright trolls have been accused of various dubious schemes and actions, with one group as the frontrunner.

Most controversial was the shocking revelation that Prenda uploaded their own torrents to The Pirate Bay, creating a honeypot for the people they later sued over pirated downloads.

The allegations ultimately resulted in a criminal indictment last year, and now one of the main Prenda attorneys has pleaded guilty before the District Court of Minnesota. A few hours ago John Steele, 45, signed a plea agreement admitting that he is guilty of mail fraud, wire fraud, and conspiracy to commit money laundering.

“Steele admitted that he and Hansmeier created a series of sham entities to obtain copyrights to pornographic movies – some of which they filmed themselves – and then uploaded those movies to file-sharing websites like ‘The Pirate Bay’ in order to lure people to download the movies,” the Department of Justice (DoJ) announced.

The Pirate Bay played an important role in this case. Not only were the founders of the site heard as witnesses, but the site was also an unwitting part of Prenda’s honeypot scheme as our coverage exposed several years ago.

“…defendants caused P.H. to upload their clients’ pornographic movies to BitTorrent file-sharing websites, including a website named the Pirate Bay, without their clients’ consent in order to entice people to download the movies and make it easier to catch those who attempted to obtain the movies,” the plea agreement reads.

From the plea agreement 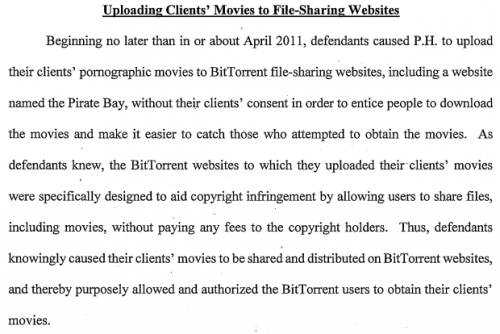 Prenda Law went to great lengths to hide its direct involvement in the uploading of the material as well as its personal stake in the lawsuits and settlements, according to the plea agreement.

After extracting IP-addresses of account holders who allegedly shared the files Prenda created and uploaded, they asked courts for subpoenas to obtain the personal info of their targets from ISPs. This contact information was then used to coerce victims to pay high settlement fees.

“Steele and Hansmeier used extortionate tactics such as letters and phone calls to threaten victims with enormous financial penalties and public embarrassment unless they agreed to pay a $3,000 settlement fee,” the DoJ writes.

No sentencing date has been set yet. In theory, the Prenda attorney now faces statutory maximum sentence of 40 years in prison as well as a criminal fine of hundreds of thousands of dollars. However, by signing a plea agreement Steele is likely eligible for a reduced sentence.

Steele’s co-defendant Paul Hansmeier remains innocent until proven otherwise. However, he appears to be worse off now that Steele’s words can be used against him. Steele’s full guilty plea is available here (pdf).