In 2019, a U.S. District Court in Minnesota sentenced Paul Hansmeier to 14 years in prison, to be followed by two years of supervised release.

Hansmeier and fellow attorney John Steele went a step further though. Among other things they lied to the courts, committed identity theft, and concocted a scheme to upload their own torrents to The Pirate Bay, creating a honeypot for the people they later sued over pirated downloads.

Both attorneys pleaded guilty but Hansmeier reserved the right to appeal his failed motion to dismiss. The former attorney hoped for a better outcome. However, earlier this year the United States Court of Appeals affirmed the ruling, including the $1.5 million in restitution for the victims of the piracy honeypot scheme.

This setback wasn’t the end of the road though. Hansmeier continued to push back and filed several lawsuits, listing several federal defendants including U.S. Attorney for the District of Minnesota Anders Folk, among others.

With these cases, Hansmeier attempts to legitimize the honeypot scheme, which he actually restarted from prison to make his point. In addition, he asked the U.S. Supreme Court to hear his appeal.

Hansmeier petitioned the Supreme Court in July. According to the filing, there is a split among the lower courts on an important “materiality” issue that’s central to his mail fraud and wire fraud conviction.

While the former Prenda attorney doesn’t deny that he trapped copyright infringers and failed to disclose crucial information to courts, the petition questions whether this can be qualified as an actionable scheme to defraud.

This week, the Supreme Court decided not to take on the case. Hansmeier’s petition was denied without further comment, which effectively closes this appeal option. 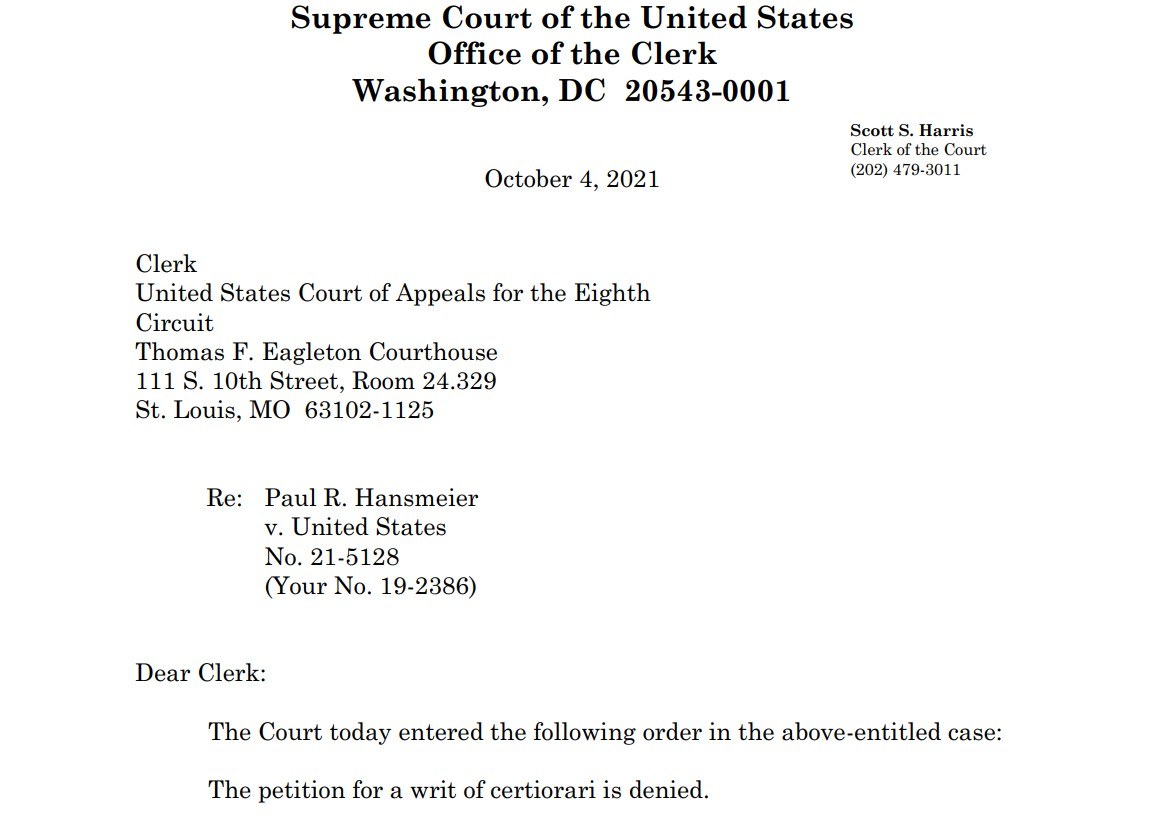 The denial is another setback for Hansmeier, who continues to push back. In the civil cases, he accuses the authorities of actively hindering his legal efforts to challenge the criminal mail fraud, wire fraud, and extortion statutes

In several filings, written from prison, the former attorney accuses the federal defendants of retaliating by putting him in administrative detention.

Apparently, Hansmeier was thrown in “the hole” soon after he targeted several federal defendants in a series of lawsuits a few months ago. These restrictions prevent him from properly serving all defendants.

“As a result of the foregoing illegal retaliation, Hansmeier has been unable to further his service efforts. As an administrative detainee, Hansmeier has access to food, water, a legal pad, a 4-inch pen, and not much else.”

Hansmeier asks for more time to serve all defendants. At the time of writing, the court has yet to respond to this request. However, it’s clear that the convicted attorney is not giving up easily.

The above stands in sharp contrast with how Hansmeier’s former colleague John Steele approached the matter. Steele cooperated with the authorities from the start and received a reduced prison sentence of five years.

According to recent court records, Steele is already planning for his release, which is less than three years away. His request for a supervised release in Arizona, where he will first be transferred to a halfway house when the time comes, was granted last month.