Ever since The Pirate Bay crew added a cryptocurrency miner to their site last month, the debate over user mining has sizzled away in the background.

The basic premise is that a piece of software embedded in a website runs on a user’s machine, utilizing its CPU cycles in order to generate revenue for the site in question. But not everyone likes it.

The main problem has centered around consent. While some sites are giving users the option of whether to be involved or not, others simply run the miner without asking. This week, one site operator suggested to TF that since no one asks whether they can run “shitty” ads on a person’s machine, why should they ask permission to mine?

It’s a controversial point, but it would be hard to find users agreeing on either front. They almost universally insist on consent, wherever possible. That’s why when someone comes up with something innovative to solve a problem, it catches the eye.

Earlier this week a user on Reddit posted a screenshot of a fairly well known private tracker. The site had implemented a mining solution not dissimilar to that appearing on other similar platforms. This one, however, gives the user something back.

Mining for coins – with a twist

First of all, it’s important to note the implementation. The decision to mine is completely under the control of the user, with buttons to start or stop mining. There are even additional controls for how many CPU threads to commit alongside a percentage utilization selector. While still early days, that all sounds pretty fair.

Where this gets even more interesting is how this currency mining affects so-called “upload credit”, an important commodity on a private tracker without which users can be prevented from downloading any content at all.

Very quickly: when BitTorrent users download content, they simultaneously upload to other users too. The idea is that they download X megabytes and upload the same number (at least) to other users, to ensure that everyone in a torrent swarm (a number of users sharing together) gets a piece of the action, aka the content in question.

Now, getting more “upload credit” can be as simple as uploading more, but some users find that difficult, either due to the way a tracker’s economy works or simply due to not having resources. If this is the case, some sites allow people to donate real money to receive “upload credit”. On the tracker highlighted in the mining example above, however, it’s possible to virtually ‘trade-in’ some of the mining effort instead.

Tracker politics aside (some people believe this is simply a cash grab opportunity), from a technical standpoint the prospect is quite intriguing.

In a way, the current private tracker system allows users to “mine” upload credits by donating bandwidth to other users of the site. Now they have the opportunity to mine an actual cryptocurrency on the tracker and have some of it converted back into the tracker’s native ‘currency’ – upload credit – which can only be ‘spent’ on the site. Meanwhile, the site’s operator can make a few bucks towards site maintenance.

Another example showing how innovative these mining implementations can be was posted by a member of a second private tracker. Although it’s unclear whether mining is forced or optional, there appears to be complete transparency for the benefit of the user.

The mining ‘Top 10’ on a private tracker 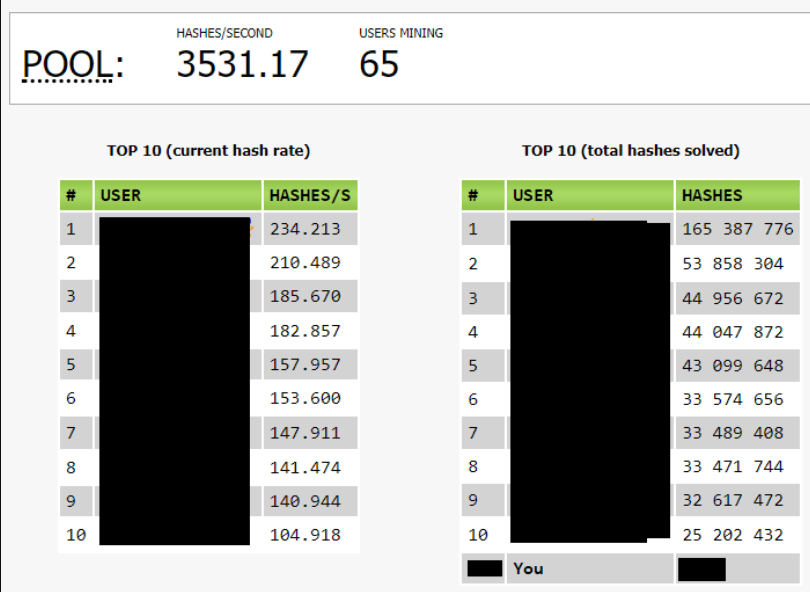 In addition to displaying the total number of users mining and the hashes solved per second, the site publishes a ‘Top 10’ list of users mining the most currently, and overall. Again, some people might not like the concept of users mining at all, but psychologically this is a particularly clever implementation.

Utilizing the desire of many private tracker users to be recognizable among their peers due to their contribution to the platform, the charts give a user a measurable status in the community, at least among those who care about such things. Previously these charts would list top uploaders of content but the addition of a ‘Top miner’ category certainly adds some additional spice to the mix.

Mining is a controversial topic which isn’t likely to go away anytime soon. But, for all its faults, it’s still a way for sites to generate revenue, away from the pitfalls of increasingly hostile and easy-to-trace alternative payment systems. The Pirate Bay may have set the cat among the pigeons last month, but it also gave the old gray matter a boost too.