During the reign of the first few generations of consoles, gamers became accustomed to their machines being compromised by hacking groups and enthusiasts, to enable the execution of third-party software.

Often carried out under the banner of running “homebrew” code, so-called jailbroken consoles also brought with them the prospect of running pirate copies of officially produced games. Once the floodgates were opened, not much could hold things back.

With the advent of mass online gaming, however, things became more complex. Regular firmware updates mean that security holes could be fixed remotely whenever a user went online, rendering the jailbreaking process a cat-and-mouse game with continually moving targets.

This, coupled with massively improved overall security, has meant that the current generation of consoles has remained largely piracy free, at least on a do-it-at-home basis. Now, however, that position is set to change after the first decrypted PS4 game dumps began to hit the web this week.

Thanks to release group KOTF (Knights of the Fallen), Grand Theft Auto V, Far Cry 4, and Assassins Creed IV are all available for download from the usual places. As expected they are pretty meaty downloads, with GTAV weighing in via 90 x 500MB files, Far Cry4 via 54 of the same size, and ACIV sporting 84 x 250MB. 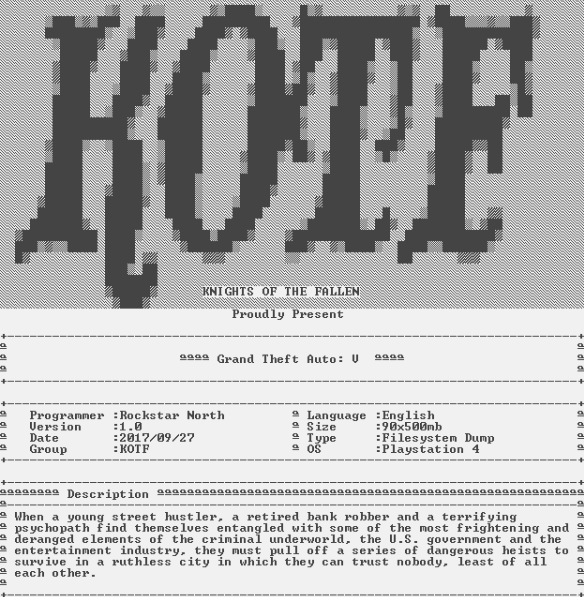 While undoubtedly large, it’s not the filesize that will prove most prohibitive when it comes to getting these beasts to run on a PlayStation 4. Indeed, a potential pirate will need to jump through a number of hoops to enjoy any of these titles or others that may appear in the near future.

KOTF explains as much in the NFO (information) files it includes with its releases. The list of requirements is long.

First up, a gamer needs to possess a PS4 with an extremely old firmware version – v1.76 – which was released way back in August 2014. The fact this firmware is required doesn’t come as a surprise since it was successfully jailbroken back in December 2015.

The age of the firmware raises several issues, not least where people can obtain a PS4 that’s so old it still has this firmware intact. Also, newer games require later firmware, so most games released during the past two to three years won’t be compatible with v1.76. That limits the pool of games considerably.

Finally, forget going online with such an old software version. Sony will be all over it like a cheap suit, plotting to do something unpleasant to that cheeky antique code, given half a chance. And, for anyone wondering, downgrading a higher firmware version to v1.76 isn’t possible – yet.

But for gamers who want a little bit of recent PS4 nostalgia on the cheap, ‘all’ they have to do is gather the necessary tools together and follow the instructions below.

Easy – when you know how

While this is a landmark moment for PS4 piracy (which to date has mainly centered around much hocus pocus), the limitations listed above mean that it isn’t going to hit the mainstream just yet.

That being said, all things are possible when given the right people, determination, and enough time. Whether that will be anytime soon is anyone’s guess but there are rumors that firmware v4.55 has already been exploited, so you never know.