Universal Music Can Delete Any SoundCloud Track Without Oversight

The major record labels still see online piracy as one of the main threats to their industry. To counter this problem they are constantly monitoring the Internet for copies of their work being shared without permission.

This also happens at SoundCloud, which in recent years became one of the most popular services for people to share music.

As a legitimate service, SoundCloud helps copyright holders by accepting takedown requests. However, in some cases SoundCloud goes a step further.

This is what DJ Mr Brainz discovered after his paid account was terminated due to repeated copyright infringements. Mr Brainz used SoundCloud to post copies of his radio show, which he believes drives more sales, but Universal Music disagreed and took down his files.

To find out more about the alleged infringements the DJ asked SoundCloud for additional details, as Do Androids Dance reports. Quite surprisingly, however, SoundCloud couldn’t provide more information as the removals were carried out by Universal music directly.

“Your uploads were removed directly by Universal. This means that SoundCloud had no control over it, and they don’t tell us which part of your upload was infringing. If you look at your tracklist it may help you find the Universal content they wanted blocked,” SoundCloud’s copyright team explained.

“The control of removing content is completely with Universal. This means I can’t tell you why they removed your uploads and not others, and you would really need to ask them that question,” the SoundCloud representative adds. 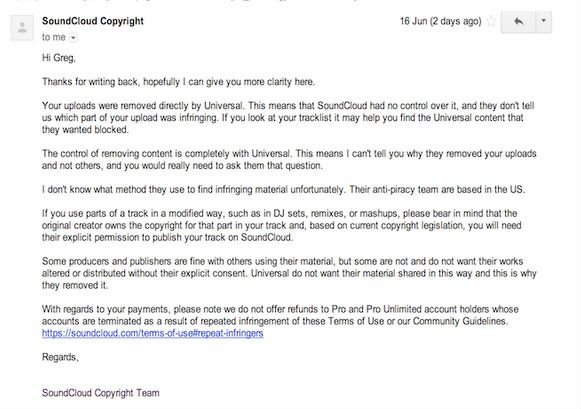 In other words, SoundCloud grants Universal Music the power to delete any and all content they deem to be infringing. This apparently happens without oversight or any record of what’s being taken down.

This blanket removal power is especially problematic since the affected users don’t know what they have done wrong. Without any details on the allegedly infringed track, it’s pretty much impossible to file a counter notice.

These type of broad takedown powers are not unique to SoundCloud. Previously YouTube has come under fire because the company allowed record labels to remove “disrespectful” videos or other non-infringing files the labels deemed inappropriate.

The recent issues at SoundCloud are not an isolated incident either. Over the past several months many users have complained about an avalanche of takedown notices. After America’s DJ Kaskade had 70 percent of his SoundCloud tracks removed due to alleged copyright infringements, he said he would start his own music sharing site instead.

Despite the critique SoundCloud sees no wrongdoing. The company points out that users are free to dispute any inaccurate takedowns. Unfortunately that’s easier said than done.

It is clear that SoundCloud is putting its users at a significant disadvantage here.