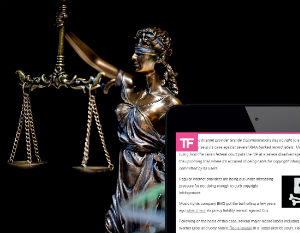 Some of the world’s largest music companies have taken several ISPs to court, accusing them of not doing enough to curb piracy.

This legal campaign, which is supported by the RIAA, resulted in a massive windfall for the copyright holders last month.

Following a two week trial, Cox was found guilty by a jury that awarded a billion dollars in damages. Soon after this win, the music companies shifted their focus to the next battle, the upcoming trial against ISP Grande Communications.

Similar to the Cox case, the music companies, including Capitol Records, Warner Bros, and Sony Music, argue that the Internet provider willingly turned a blind eye to pirating customers. As such, it should be held accountable for copyright infringements allegedly committed by its users.

Grande will start the trial at a severe disadvantage. The court previously granted summary judgment in favor of the record labels, ruling that the ISP will go to trial without a safe harbor defense. This means that it can be held secondarily liable for the pirating activity of its users.

This week both parties submitted their ‘voir dire’ questions for potential trial jurors. The jury consists of members of the public, but the legal teams from both sides are allowed to ask questions during the selection process, to ensure that jurors are unbiased.

The music companies, for example, will ask whether potential jurors or people close to them, ever worked for Grande Communications. That makes sense. The same is true for the question that asks whether they have any negative opinions of record labels.

While browsing through the 40 questions for the jurors, we also noticed that the labels are interested in anyone reading this article right now. Apparently, being a reader of TorrentFreak or Ars Technica is something prospective jurors must disclose.

“Have you ever read or visited Ars Technica or TorrentFreak?” question 33 reads.

What the labels plan to do with the answers remains a guess. We have covered these and other piracy liability lawsuits in great detail over the years. So, perhaps the labels want to pick our readers, many of whom are legal experts. On the other hand, our news selection and the associated knowledge may also be seen as bias.

Whatever the reason, we’ll take it as a compliment.

Reading through the rest of the questions we see more interesting mentions. The labels want to know whether the jurors have ever downloaded anything from torrent sites such as The Pirate Bay and RARBG, for example. In addition, they are asked whether they support the Electronic Frontier Foundation (EFF) or if they ever worked for a technology company.

What also stands out is the question that asks prospective jurors if they believe there are “too many frivolous lawsuits nowadays,” while asking the candidates to give examples.

The record labels are not the only ones asking questions of course. Grande Communications has also prepared a list, hoping to signal bias or other disqualifying factors.

The ISP asks, for example, if the candidates have ever worked at a record label or in the music industry. The company also asks whether they believe it’s an ISP’s responsibility to monitor and police online piracy.

Grande doesn’t ask about TorrentFreak, but it does want to know whether the prospective jurors have ever heard of BitTorrent.

The jury selection for the upcoming trial is scheduled to take place on February 24th and the trial will start a day later. In the coming weeks, both parties will work on their final preparations.