As one of the most popular consumer items in the whole world, music is important to billions of citizens globally. It’s also surrounded by a giant industry that for years has complained bitterly about online piracy.

More recently, however, there have been signs that illegally grabbing music from the Internet is not as prevalent as it once was. A new report from market research and data analytics firm YouGov only adds weight to that apparent shift.

The headline stat from the company’s Music Report is that just one in ten Brits are currently downloading music illegally. That’s down from almost double (18%) that figure five short years ago.

While this is already a decent reduction, YouGov says that the 10% figure is set to further decrease in the years to come.

More than six out of ten (63%) illegal music downloaders predict they’ll still be pirating in five years’ time but a significant 22% believe they won’t. Just over a third (36%) acknowledge that using unofficial sources for music is becoming more difficult but the summary doesn’t offer reasons why. 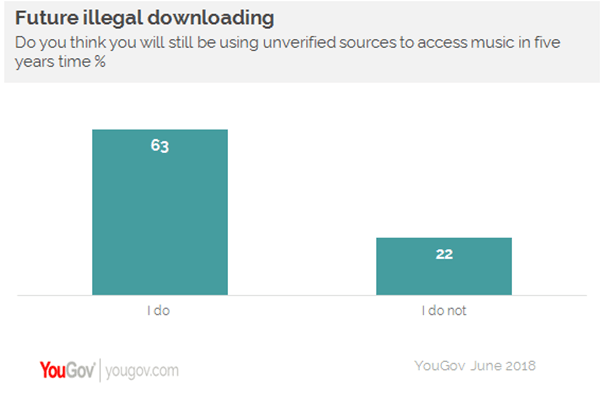 “It is now easier to stream music than to pirate it. And the cost is not prohibitive,” one respondent said. “Spotify has everything from new releases to old songs, it filled the vacuum, there was no longer a need for using [an] unverified source,” added another.

While the shift to legal services is certainly encouraging for the labels, millions of music consumers still obtain their content illegally.

According to YouGov, just over half of this group (51%) say that “exclusives” restricted to a single platform are an irritating factor with 44% claiming that they only download illegally when they can’t find the content elsewhere.

“While illegal downloads still present a significant challenge to the music industry, there appears to be some light at the end of the tunnel,” says Justin Marshall, Associate Director, YouGov.

“Our research reveals a change in behavior, with those that previously attained music by unlawful means now being enticed by the low costs and ease of use associated with streaming.”

Marshall says that since consumers are increasingly satisfied with legal services, trawling the Internet for illegal copies is no longer high on their agenda.

“Whether or not streaming is what finally banishes illegal downloads remains to be seen, but there are encouraging signs,” he concludes.

In an effort to appreciate the nuances behind the figures, TorrentFreak asked YouGov for a copy of the report. Sadly we were told that it won’t appear publicly since it’s part of a wider study being made available to clients.

That leaves the question of how “stream-ripping” (downloading music from sites like YouTube onto a user’s machine) fits into this overall decrease in music piracy. While the record labels once considered file-sharing sites and services as the work of the devil, today they’re much more likely to be heard complaining about stream-ripping and how this affects revenues.

It’s not clear whether stream-ripping is considered an illegal download as far as the report goes. However, there are plenty of signs that downloading music in this manner is gaining traction among younger people for whom YouTube is often the default music source. The labels are extremely keen to bring this kind of activity to an end.

All that said and despite the persistent piracy problem, the popularity of legal services, especially among pirates, cannot be ignored.

A report released by MUSO found that 91% of all pirates already have a streaming subscription, such as Netflix, Amazon Prime, Spotify or Apple Music. That’s a higher rate than their non-pirating counterparts, of which less than 80% subscribe to legal services.