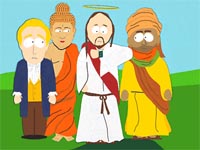 The debate over whether it’s acceptable to engage in any kind of piracy is likely to persist for many years, as those with vested interests argue over whether the act is tantamount to stealing or is morally permissible.

While that argument continues, researchers at Manchester University in the UK have been looking at links between those who regularly attend places of worship and various low-level offenses including the downloading of copyrighted music.

As part of the project, last July 1,214 18 to 34-year-olds were asked about their faiths and how often, if ever, they attend a place of worship. They were also asked how often they engage in minor offenses such as music piracy, littering, drug use, shoplifting, fare dodging and non-attendance at work or school.

Project leader and PhD student Mark Littler informs TorrentFreak that in terms of music piracy respondents were asked whether they had previously downloaded music (excluding freely-given or promotional items) without paying for it. They were also asked how often they attend a religious establishment (every day, every week, every month or never), excluding weddings, funerals and other similar events.

“This research implies that the act of visiting a place of worship may trigger a significant reduction in the likelihood of involvement in certain types of criminal and delinquent behavior,” Littler explains.

Littler says the project’s findings suggest that regular attendance at a place of worship is linked to a “significant” reduction in the likelihood of involvement in low-level offenses, including the downloading of copyrighted material without permission. Furthermore, instances of offending progressively decreased in those who attended religious establishments more often.

While Littler says this suggests that religious groups have a norm against piracy, that does not necessarily amount to a blow against atheism.

“Religious practice is just one way of gaining exposure to the pro-social behavioral norms that are at the heart of this relationship; other, more secular, activities may equally serve a similar role,” he concludes.

The study was funded by the Bill Hill Charitable Trust and is due to be published later in 2014.

Piracy: Not Even God Himself Can Stop It