To many people the Warez Scene is something mythical or at least hard to comprehend. A group of people at the top of the piracy pyramid.

The Scene is known for its aversion to public file-sharing, but nonetheless it’s in large part responsible for much of the material out there today.

The goal of most Scene groups is to be the first to release a certain title, whether that’s a film, music or software. While there is some healthy competition The Scene is also a place where lifelong friendships are started.

A few days ago, on October 17, the Scene lost Goolum, a well-respected member and friend. Only in his late thirties, he passed away after being part of the Scene for more than a decade.

As a cracker Goolum, also known as GLM, was of the more experienced reverse engineers who worked on numerous releases.

Through the years Goolum was connected to several groups which are now retired, some for more than a decade. To honor their fallen friend, the groups ZENiTH, Lz0, SLT and MiDNiGHT have made a one-time comeback.

Below is an overview of their farewell messages, which honor him for his cracking skills but most of all as a friend. Our thoughts go out to Goolum’s friends and family.

ZENiTH, a group that retired around 2005, mentions Goolum’s loyalty and the love for his daughter.

“Goolum has been in and around the scene since the Amiga days but had never been a guy to jump from group to group, but stayed loyal and dedicated to the few groups he was involved in.”

“We are all proud to have been in a group with you, to have spent many a long night sharing knowledge about everything, learning about your daughter who you where very proud of, and all the projects you were involved in.” 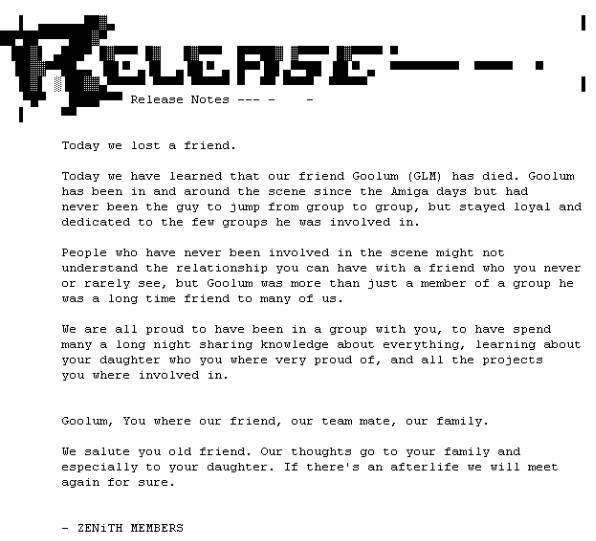 Lz0 or LineZer0, split from the Scene last year but many of its members are still actively involved in other roles. The group mentions the hard time Goolum has had due to drug problems. LzO also highlights Goolum’s love for his daughter, and how proud he was of her.

“We all knew that he struggled in life – not just economical but also on a personal level and not the least with his drug issues. One of the things that kept him going was his wonderful daughter whom he cherished a lot. He often talked about her, and how proud of her he was. He was clear that if there was one thing in life he was proud of – it was that he became the dad of a wonderful girl.”

“We’re shocked that when finally things started to move in the right direction, that we would receive the news about his death. It came without warning and we can only imagine the shock of his family. It’s hard to find the right words – or words for that matter. Even though it might have appeared as that he was lonely – with few friends, he knew that we were just a keyboard away.” 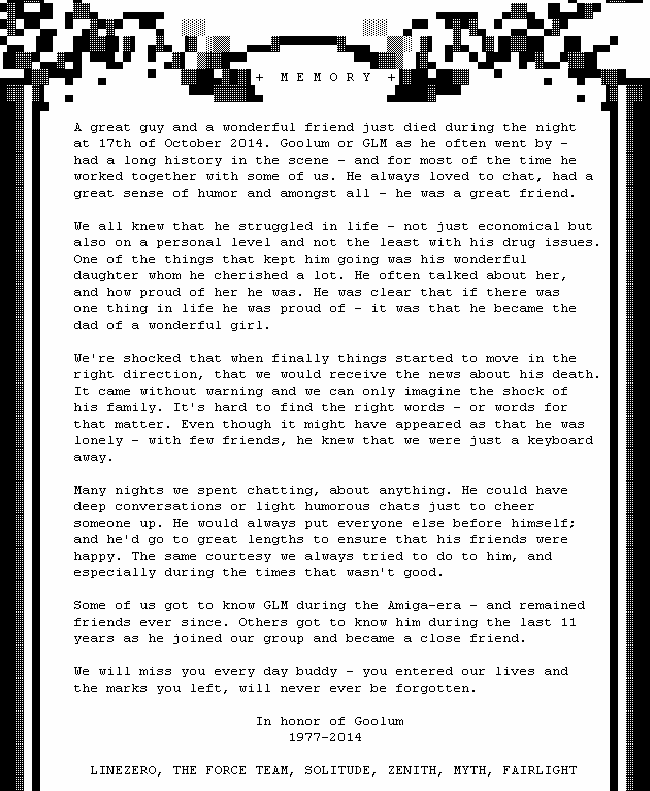 SLT or SOLiTUDE has been retired since 2000 but returns to remember Goolum. The group notes that he will be dearly missed.

“You will be missed. It is not easy to say goodbye to someone who you have known for over a decade, trading banter, laughs, advice and stories. You leave behind a daughter, a family and a group of friends, who will miss you dearly.”

“As the news have spread, the kind words have poured in. Solitude is releasing this in honor of you, to show that the values we founded the group on is the exact values you demonstrated through your decades of being in the scene. Loyalty, friendship and hard work. Our thoughts are with you, wherever you may be.”

MiDNiGHT hasn’t been active for nearly a decade but have also honored Goolum with a comeback. The group mentions that he was a great friend who was always in for a chat and a beer.

“Life won’t ever be the same again my friend. We could sit and chat for hours and hours, and even then we knew each other well enough that nothing more was required than a beer, a rant and a small *yarr* and we’d know it would all be good.”

“This time it’s not good mate. I am here, you are not. I can’t even begin to express how this makes me feel – except an absolute sadness.” 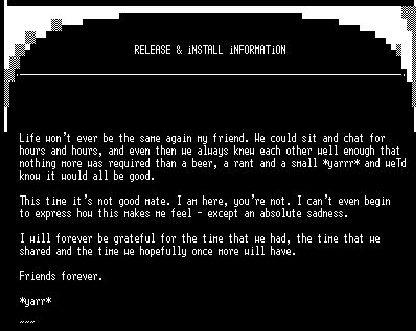