In February, a group of developers released a project that had many passionate GTA fans excited.

After years of work, they published “re3” and “reVC,” two fully reverse-engineered releases of the GTA III and Vice City games, which first came out two decades ago.

The code allows GTA fans to play these older games on new devices, which is impossible to do with the original version. A copy of the original game is still required for the code to work properly, however, since game assets are not included.

The reverse-engineered code was published in the ‘re3’ repository on GitHub, which is operated by the GTA Modding account. Soon after, dozens of copies were made, and many GTA fans were excited to get behind the wheel again.

Take-Two and its parent company Rockstar Games were not as excited. A few days after the release, the companies asked GitHub to remove the “re3” and “reVC” repositories, as well as several forks. These were clear copyright infringements, the companies claimed.

GitHub complied with the request and pulled the code offline. While GitHub’s hands were tied, many commenters noted that the takedown went too far, arguing that the re3 project is considered fair use.

Under US law, reverse-engineering can indeed be seen as fair use, but this area is a bit of a minefield. Whether something is fair use or not depends on a variety of factors that are ultimately judged in court.

However, after a few weeks had passed, ‘re3’ suddenly popped up on GitHub again. While the original repository remained offline, the developers of two forks filed counter-notices. This worked, as these forks were eventually restored by GitHub.

These counter-notices didn’t mention fair use but there was no response from Take-Two either. When a developer disputes a takedown the copyright holder typically has two weeks to take legal action. If that doesn’t happen, the code is restored.

It seems likely that these counter-notices strengthened the position of official developers, as they also disputed the takedown earlier this month. The ReGTA team (re3/reVC) specifically mentions fair use as a defense.

“The code in this repo was developed by reverse engineering object code that is not contained in this repo. We believe that any code in this repo that is similar to code or other content owned by Take-Two is either unprotected by copyright or is permitted under fair use,” their notice reads. 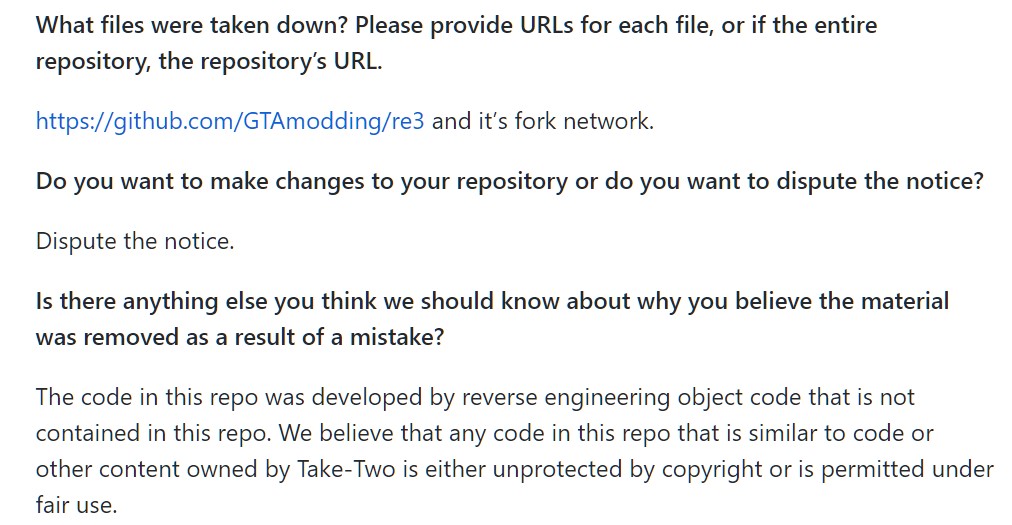 ‘Aap’, team leader of the Re3 project, informs us that this type of reverse engineering should be considered fair use. The main goal is to help GTA fans play the game, and this may even be beneficial to Take-Two as well.

“We claim that our project falls under fair use: our goal is clearly not piracy or anything as you still need the original game. Rather we want to care for the game by fixing and improving it and bringing it to new platforms.

“This has caused many people to buy or re-buy the game from Take-Two, so it’s not like they’re losing money, quite the opposite,” aap adds.

While many GTA fans will agree, filing a counter-notice isn’t without risk. Under the DMCA, GitHub is required to restore the code after 14 days, unless the copyright holder files a lawsuit.

GitHub was kind enough to refer the developers to a legal expert they’re working with. This expert informed the team about the rights and risks, after which the reGTA team went through with the counter-notice.

Luckily for the reGTA team, Take-Two didn’t file a lawsuit. This means that the re3 and reVC code was simply restored, without any modifications, and is freely available on GitHub again.

The developers are happy with the outcome thus far. They never wanted any legal trouble and stress that they simply act with the best interest of the broader gaming community in mind.

“Classic games like GTA are part of our cultural heritage and it’s important to preserve and maintain them,” aap tells us, adding that the sm64 (Super Mario 64) and devilution (Diablo) projects fall under the same umbrella.

“Reverse engineering these games makes sure that people will always have a way to play them.”