These events are relatively common and attract very little attention, unless the account in question is operated by someone famous or who is otherwise important.

On Friday, Ravi Shankar Prasad, India’s Minister for Communications, Electronics & Information Technology and Law & Justice, had his account suspended by Twitter. The clearly infuriated Minister later took to Twitter itself to voice his displeasure, with a brief but inconclusive explanation for the action.

“Friends! Something highly peculiar happened today,” Prasad wrote. “Twitter denied access to my account for almost an hour on the alleged ground that there was a violation of the Digital Millennium Copyright Act of the USA and subsequently they allowed me to access the account.”

Prasad accompanied his tweet with a copy of the notice he received from Twitter. It indicated there had been a DMCA complaint and if he wanted his account to be unblocked, he effectively needed to educate himself on copyright law – quite something for a fully qualified lawyer heading up India’s Law and Justice Ministry. 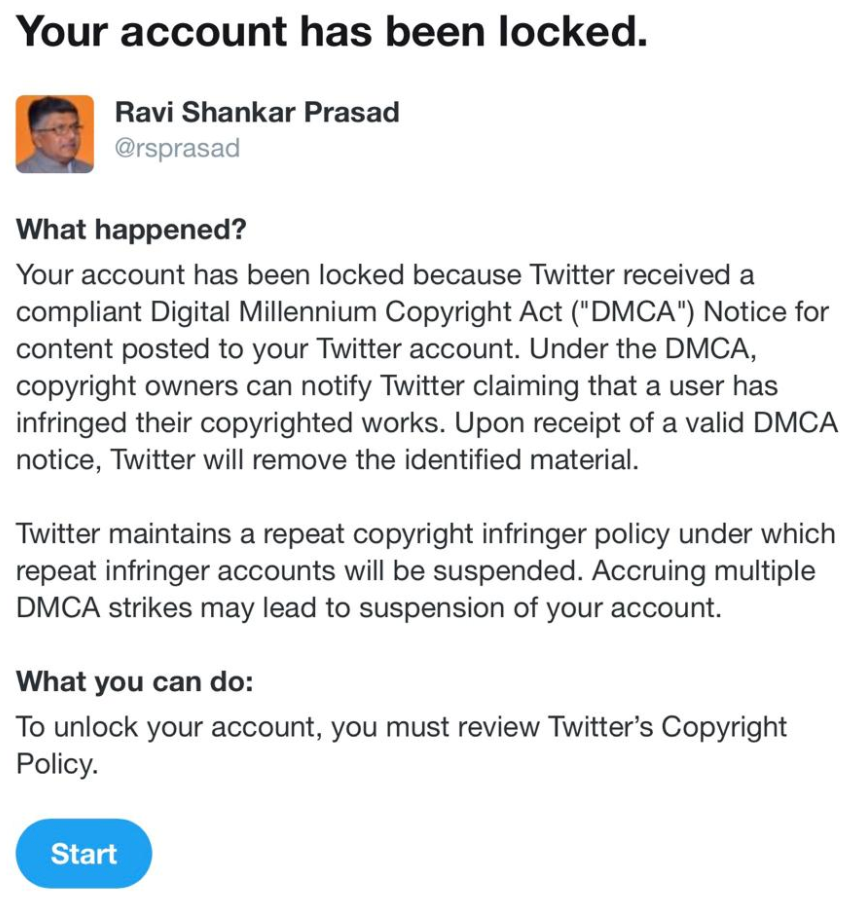 It appears that Prasad completed the required viewing of Twitter’s Copyright Policy and an hour later his account was unlocked. However, the Minister was not happy.

In a series of tweets, the Indian politician attacked Twitter for suspending his account, accusing the company of breaching local law and being duplicitous when it comes to free speech.

Twitter’s actions were in gross violation of Rule 4(8) of the Information Technology (Intermediary Guidelines and Digital Media Ethics Code) Rules 2021 where they failed to provide me any prior notice before denying me access to my own account.

Twitter’s actions indicate that they are not the harbinger of free speech that they claim to be but are only interested in running their own agenda, with the threat that if you do not tow the line they draw, they will arbitrarily remove you from their platform.

While Prasad has made his thoughts crystal clear, perhaps the more pressing question is why Twitter took action against his account in the first place.

Despite Prasad posting a series of tweets complaining about Twitter’s actions, the Minister didn’t explain why he received a copyright complaint against his account or indeed who sent it. However, since Twitter submits copies of DMCA notices received to the Lumen Database, it isn’t difficult to find that information.

On May 24, 2021, a month before Twitter suspended Prasad’s account, the platform received a DMCA notice from the International Federation of the Phonographic Industry (IFPI), stating that one of the Minister’s tweets beached copyright law.

Sent on behalf of Sony, the DMCA notice claimed infringement of the track ‘Maa Tujhe Salaam’ by AR Rahman. The offending URL now displays a notice from Twitter stating that it has been withheld due to a complaint. The original tweet dates back to 2017.

In response to Prasad’s complaints about the suspension, another Indian MP chimed in to say he too had been targeted by a takedown notice.

“Raviji, the same thing just happened to me. Clearly DMCA is getting hyperactive. This tweet has been deleted by @Twitter because its video includes the copyrighted BoneyM song ‘Rasputin’,” Shashi Tharoor wrote.

According to Lumen, Tharoor now has at least six DMCA complaints against his account, all targeting the same tweet, which appears to have featured medical students dancing to the Boney M track. Who sent the notices isn’t detailed in the complaints featured on Lumen but a response tweet featuring exactly the same song appears to have slipped through the net.

It gets even better! Now half a dozen other medical students at the same college have come out to dance in their support! #Respect #Applause #danceIsNotjihad pic.twitter.com/DApteTf4WH

While press reports in India suggest that Twitter might be firing back at the government following a spat over new legal rules (which ironically center around the requirement to remove objectionable content more quickly), this looks like a normal day at the office for the DMCA.