Under US copyright law, Internet providers must terminate the accounts of repeat infringers “in appropriate circumstances.”

Until a few years ago Internet providers rarely applied such a drastic measure but, backed by several court orders, ISPs are increasingly being held to this standard.

The music companies alleged that RCN wasn’t doing enough to stop subscribers from pirating on its network. Instead of terminating the accounts of persistent pirates, the Internet provider looked away, they argued.

The stakes in these liability lawsuits are high. Internet providers face hundreds of millions of dollars in damages claims, while tens of thousands of Internet subscribers are at risk of having their accounts terminated.

To avoid trouble, several ISPs have launched counterattacks in court. RCN accused the RIAA and its anti-piracy partner of sending ‘false and fraudulent’ DMCA notices and argued they shouldn’t serve as evidence for disconnections.

This countersuit initially failed. A New Jersey federal court concluded that RCN failed to show that it was financially hurt as a direct result of any incorrect notices. However, the court left the door open for more detailed allegations.

Last summer, the ISP filed updated complaints against the RIAA and Rightscorp. As requested, these included more details on how Rightscorp’s piracy notices caused the company to incur additional costs.

The tracking company systematically ignored the requirements RCN listed in its DMCA policy. As a result, the ISP says that it faced additional costs to update its systems so the notifications could be processed.

In addition, RCN said it had to hire outside attorneys to analyze Rightscorp complaints and deal with matters arising from the company’s refusal to add a digital signature to its DMCA notices.

The updated claims included more facts and examples of costs incurred by the ISP, but the court was still not convinced that Rightscorp or the RIAA should be held liable.

To state a proper claim under the California Unfair Competition Law (UCL), there has to be some form of injury that can be directly linked to the alleged fraud. While the updated allegations are indeed more detailed, they remain insufficient.

A few days ago U.S. District Court Judge Michael Shipp dismissed the renewed counterclaims against Rightscorp and the RIAA, concluding that they can’t be held responsible for these additional costs. Rightscorp may have ignored RCN’s DMCA takedown requirements but these ‘rules’ are set by RCN, not by the law.

“Even if Rightscorp could have saved Internet Providers ‘time and effort’ by following their DMCA Policy, any additional costs to Internet Providers are based on how they chose to design their system. Consequences of that personal choice are not damages meant to be addressed by the UCL.”

RCN also pointed out that it incurred significant additional costs conducting legal evaluations of its potential remedies against Rightscorp’s actions. Again, Judge Shipp acknowledges that these costs exists, but there is no legal basis to hold Rightscorp or the RIAA responsible.

“[RCN’s] desire for companies like Rightscorp to tailor infringement notifications in certain ways to save Internet Providers money is understandable but, as it stands, no such requirement is obligated by law.

Overall, the court rules that RCN doesn’t have standing to raise a counterclaim against Rightscorp or the RIAA under California’s UCL. The matter is therefore dismissed and the ISP is not allowed to amend its claims for a second time. 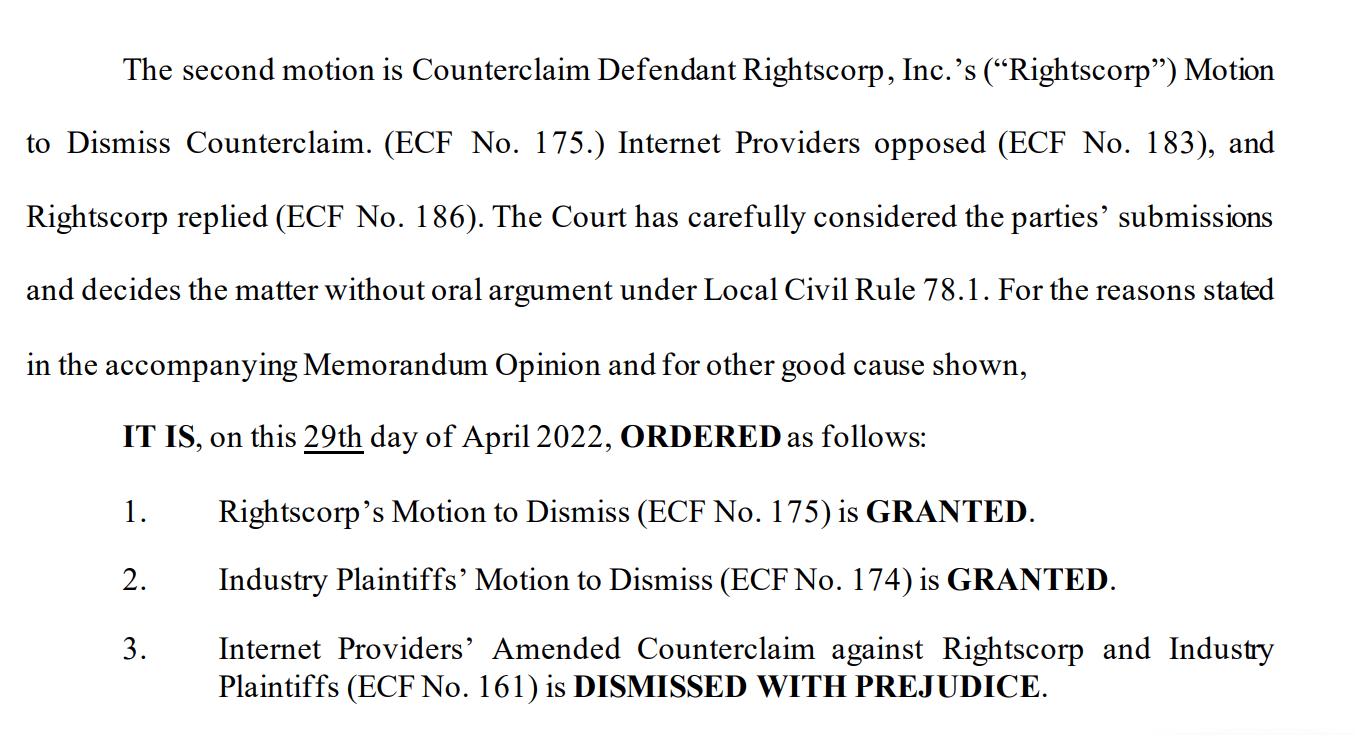