Back in May the RIAA reached a historic milestone in its quest to remove copyright-infringing links from the Internet.

The music industry group asked Google to remove the 20 millionth URL from its indexes, doubling up on a similar number of requests already sent to underlying sites.

However, it now seems that either the RIAA are getting faster and better at sending notices, or the situation is somehow getting worse. It’s quite possibly a combination of the two.

After taking just over a year to send 20 million takedowns, just a few moments ago Google processed the RIAA’s 25 millionth URL takedown request. That means that in just six weeks the RIAA has achieved something that previously took it a quarter of a year.

Today’s development bumps the RIAA into second spot in the all-time Google notice-senders’ chart, ahead of third-placed BPI with 24.3 million URLs taken down. The king of the hill is Indian anti-piracy outfit Degban with around 28.5 million. In fourth place sits US-based MarkMonitor, owner of “six strikes” monitoring company DtecNet. 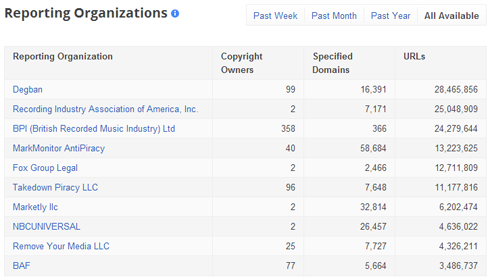 At the time of the 20 million record, Brad Buckles, RIAA executive vice president of anti-piracy, described the situation in less than optimistic terms.

“Every day produces more results and there is no end in sight. We are using a bucket to deal with an ocean of illegal downloading,” Buckles complained. But is that because more and more content is flowing onto the Internet or are other forces at play?

Part of the problem for rightsholders sending notices to Google is that they are not actually removing any content, only links to it. Furthermore, while content is easily duplicated online, links to content are duplicated even more easily.

Interestingly, industry attempts to block file-sharing sites such as The Pirate Bay and KickAssTorrents appear to be the driving force behind an exponential increase in links that were once confined to these sites. Thanks to the dozens of proxy sites that have sprung up to facilitate access to blocked domains, the censored links are being duplicated dozens and dozens of times.

To put that into perspective, Pirate Bay currently reports 4.99 million torrents but you have to multiply that by the dozens of currently operational proxies in order to find the number of URL links now available.

“As an anti-piracy agent, I can report that this is making life more difficult particularly with regards to DMCA submissions to Google,” explains James Brandes of anti-piracy company Digital Copyright Consultancy.

Brandes says that in the past he would send notices to Google to remove results for, say, The Pirate Bay, Kickass and H33T, but due to the sites using proxies, there is now much more work to do.

“Predictably, this creates far more work for content owners (particularly for small independent labels who are not members of the BPI) and their agents. For example, I’d estimate that well over 5 million additional search results have been removed from Google as a result of sites using alternative URLs,” Brandes says.

To give an idea of the the scale of the problem, Google has received 1.05 million takedowns for The Pirate Bay’s main domain. However, thanks to proxies appearing due to blockades, Google has also received 520K for PirateProxy, 381K for Malaysiabay, 356K for PirateReverse, 330K for PirateShit, 311K for PirateBay.ee and 292K for Piraten.lu. And this is just the tip of a massive iceberg that grows every week.