Rightscorp Plans to Hijack Pirates’ Browsers Until a Fine is Paid 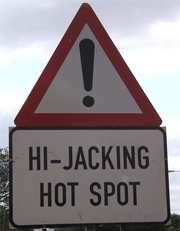 Earlier this week, anti-piracy outfit Rightscorp published its results for 2015. They make for dismal reading, with the company recording a net loss of $3.43m, up from the $2.85m net loss recorded in 2014.

The company has a number of problems. First and foremost it has too few clients and somehow needs to expand the catalog of copyrights under its protection. With a wider spread and greater volume it could do better, but that’s only part of the problem.

Internet service providers in the United States aren’t generally fans of copyright trolls like Rightscorp. They prey on valuable customers who often incorrectly conclude that their provider has been spying on them. Of course the sting in the tail is the compensation that Rightscorp demands, all conveniently delivered to the Internet subscriber by their ISP.

In its filing this week Rightscorp blamed falling revenues on a reluctance by ISPs to pass on these automated fines. Nevertheless, the company isn’t giving up on improved cooperation with service providers since it has a plan that could streamline its business and more or less force users to pay up.

Rightscorp says this could be achieved via a “next generation technology” its developing called Scalable Copyright, which will shift warnings and settlement demands away from easily ignored emails and towards an altogether more aggressive delivery method.

“In the Scalable Copyright system, subscribers receive each [settlement] notice directly in their browser,” the company reports.

“Single notices can be read and bypassed similar to the way a software license agreement works [but] once the internet account receives a certain number of notices over a certain time period, the screen cannot be bypassed until the settlement payment is received.”

The idea of locking browsers in response to infringement allegations is nothing new. Users of some ISPs in the United States already receive these warnings if too many complaints are made against their account. However, to date no company has asked for money to have these locks removed and the idea of ‘wheel clamping’ a browser is hardly an attractive one, especially based on the allegations of a third-party organization.

Still, Rightscorp seems confident that it can persuade ISPs to come along for the ride.

“Its implementation will require the agreement of the ISPs. We have had discussions with multiple ISPs about implementing Scalable Copyright, and intend to intensify those efforts. ISPs have the technology to display our notices in subscribers’ browsers in this manner,” the company notes.

While ISPs do indeed have the ability to hold their customers to ransom on Rightscorp’s behalf, the big question is why they would choose to do so. On the surface there seems no benefit to ISPs whatsoever, since all it will do is annoy those who pay the bills. But Rightscorp sees things somewhat differently and says that the system will actually be both cheap and beneficial to ISPs.

“We provide the data at no charge to the ISPs. With Scalable Copyright, ISPs will be able to greatly reduce their third-party liability and the music and home video industries will be able to return to growth along with the internet advertising and broadband subscriber industries,” the company explains.

That third-party liability is the requirement under the DMCA for service providers to terminate repeat infringers or face the prospect of losing their safe harbor protections.

As the recent case between BMG and Cox Communications illustrates, ISPs do need to be cautious over the issue of repeat infringers and they must have policies in place to deal with them. However, the notion that a browser-lock system like this one needs to be deployed is unlikely to be on the agenda of many ISPs, especially considering Rightscorp’s track record.

While the MPAA/RIAA Copyright Alerts program limits the numbers of warnings that can be sent to single subscriber in order to avoid labeling them as repeat infringers too quickly, Rightscorp is on record as sending 112 notices to a single Comcast user in less than 48 hours over the sharing of a single torrent.

But despite all the rhetoric, these ambitious plans to hijack browsers to generate revenue will require ISPs to co-operate more with Rightscorp, not less, so the current downward trend in forwarding the company’s notices is hardly encouraging.