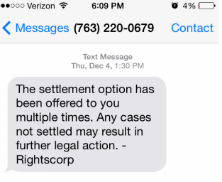 Piracy monetization firm Rightscorp has made headlines over the past year, often because of its aggressive attempts to obtain settlements from allegedly pirating Internet users.

Among other tactics the company sent DMCA subpoenas to smaller local ISPs in the United States, urging them to reveal the personal details of subscribers.

While the legitimacy of these requests is in doubt, most Internet providers complied. This is also true for the City of Monroe, Georgia, which offers cable Internet to its residents.

Rightscorp used the personal information of the Monroe residents to offer the alleged copyright infringers a settlement. The offers start with a snail mail letter, but if these are ignored things get worse.

In a complaint (pdf) filed at a federal court in Georgia, Melissa Brown and Ben Jenkins accuse Rightcorp and its clients of using intimidating robocalls and text messages to solicit settlements.

“Once Rightscorp obtains a consumer’s contact information, it commences autocalls and text messages in an attempt to intimidate the consumer into settlement,” the complaint reads.

The victims, who deny having downloaded any infringing material, note that they never gave Rightcorp permission to contact them. On the contrary, after requesting that the letters, calls and texts stop, Rightscorp continued to press for settlements.

“Jenkins sent Rightscorp numerous emails instructing Rightscorp to cease their calls, text messages, emails and letter solicitations to him and Brown. Regardless, Rightscorp continued to place calls and text messages to Plaintiffs’ cellular and home phones.”

The complaint accuses Rightscorp of willfully violating the Telephone Consumer Protection Act, which forbids companies from contacting people through robocalls and text messages without their consent.

Brown and Ben Jenkins demand damages for each violation, which may run into the thousands of dollars, and hope that this will also stop the intimidating settlement requests.

This is not the first legal battle Rightscorp has been involved in recently. A few weeks ago the company and its clients were sued for fraud, harassment and abuse for their controversial settlement scheme.

If the piracy monetization firm loses, it’s not unlikely that other accused file-sharers will follow the example.