Rojadirecta is one of the oldest and most popular linking sites for sports streaming events.

The site, which is operated by the Spanish company Puerto 80 Projects, has been around for over a decade and has built a dedicated user base. At the same time, it has had to fight some legal battles too.

Copyright holders have repeatedly accused Rojadirecta of facilitating piracy because users share links to unauthorized broadcasts. This has landed the site in court on more than one occasion. While most sites don’t put up a fight, Rojadirecta does.

This fighting spirit has paid off in the past. Among other victories, Rojadirecta managed to get its domain name back from the US Government after it was seized by the Department of Justice. In recent years, however, there have been setbacks too.

Rojadirecta was disappointed with the outcome but didn’t see it as a major problem. The Danish audience is relatively small and the site remains freely accessible elsewhere. That said, Rojadirecta did take offense to how the news was circulated by La Liga and Rights Alliance.

Both organizations initially said that a High Court “judgment” ruled that “Rojadirecta is illegal.” This was picked up by several news sites including Spain’s largest news agency Europa Press, which offers a wire service to other publications. 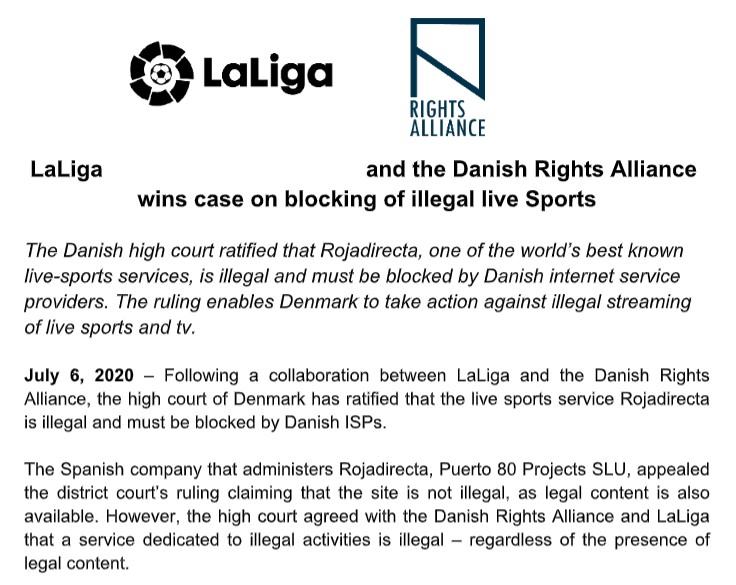 According to the linking site, however, these conclusions are factually incorrect. The order wasn’t issued after a trial and there was no “judgment.” It was merely an order that affirmed a precautionary measure, without concluding that Rojadirecta itself was illegal.

After just having lost a legal battle the inaccurate reports felt like an undeserved blow, so the site asked its legal team to take action.

“The information made public by both the Rights Alliance and LaLiga about the proceeding was wrong to a point that needed to be handled by our lawyers,” a Rojadirecta spokesperson tells TorrentFreak.

Shortly after the news broke the lawyers reached out to several sites that published the news, requesting it to be corrected. This worked relatively well. Several Spanish and Danish news sites updated their articles and even Rights Alliance altered its claims partially.

However, others were more reluctant. When Rojadirecta’s lawyers reached out to the Europa Press, the news agency refused to rectify its reporting, because it considered La Liga to be a “reliable source.”

Rojadirecta clearly disagreed and decided to take the press agency to court. During the proceeding, Rojadirecta provided a certified translation of the Danish order, which clearly conflicted with reporting of the news agency.

For example, the Danish Supreme Court wasn’t involved in the matter, as Europa Press wrote. Neither was there a “trial” or “judgment” concluding the Rojadirecta was operating illegally.

After hearing both sides, the Spanish court ruled in favor of Rojadirecta’s parent company Puerto 80 Projects. The court ordered Europa Press to issue a full retraction explaining that Rojadirecta was blocked due to links shared by its users.

This retraction, which is published here, also had to be linked from the homepage and sent to all news outlets that received the incorrect report. Finally, the news agency must also pay the legal costs of the proceeding. 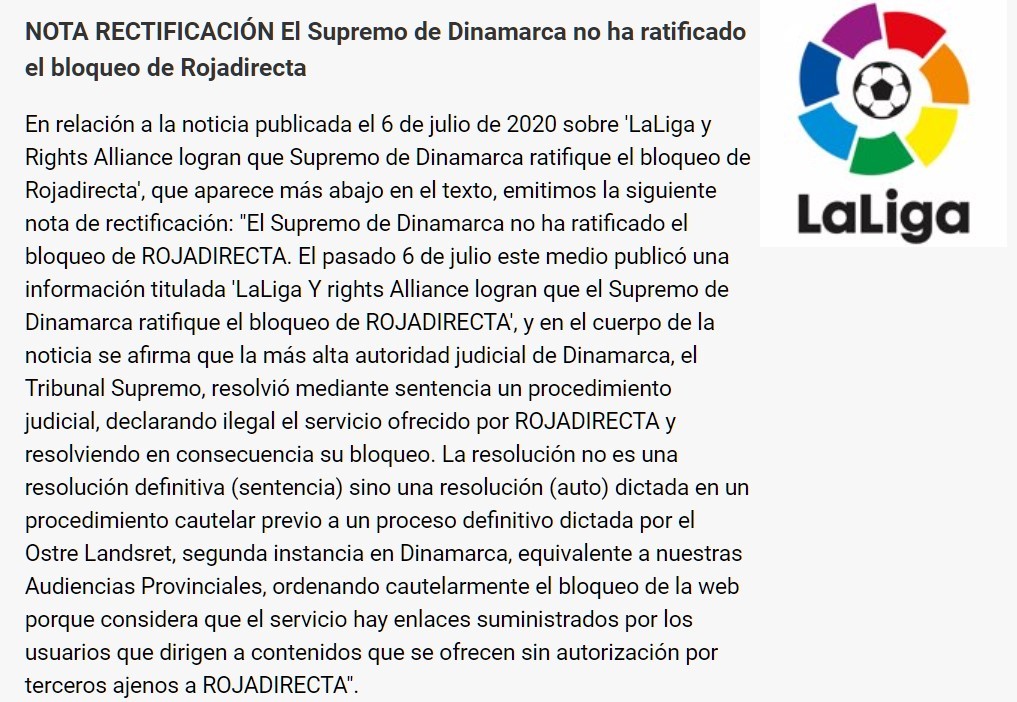 It should be noted that not all reports on this matter have been corrected. In fact, the original and incorrect Europe Press report is still online. Similarly, the Rights Alliance’s report still mentions that the High Court deemed Rojadirecta to be an illegal site.

Rojadirecta will be pleased to have won this legal battle but at this time the preliminary blocking of the site by Danish Internet providers remains in force. However, we recently learned that the site is trying to get it lifted.

Update: After publishing this article Rights Alliance director Maria Fredenslund responded to our request for comment. The anti-piracy group confirms that it partially updated its earlier press release but maintains that Rojadirecta is an illegal service based on the court order.

“We corrected the term “ruling” into “court order” since that is the correct legal term. We maintain to state that Rojadirecta.me is an illegal service based on the Eastern High Court’s findings in it’s court order.”