Reddit is one of the largest sites on the Internet, playing host to thousands of communities dedicated to every conceivable topic.

Most of these communities run along smoothly, causing no issues for their members, the site, or any entity further afield. However, when persistent copyright infringement raises its head, trouble can appear on the horizon.

Sky TV is one of the largest broadcasters in the UK, home to channels including Sky One, Sky Arts, Sky Atlantic, Sky News, Sky Cinema and Sky Sports. To view the majority of Sky channels, special equipment and a subscription package are required.

However, if watching individual TV show episodes from Sky is your thing, it’s perfectly possible to head over to Reddit and access links to free pirated copies posted to numerous TV-focused communities, some of which were moderated by a user known as ‘Cherzo’ (later ‘Cherzo1’)

According to an action filed by Sky in a Scottish court, Cherzo1 was the moderator of three sub-Reddits – r/UKTVLAND, r/notapanelshow, and r/UKPanelShowsOnly – which together had more than 51,000 subscribers. Cherzo also had a YouTube channel with more than 95,000 subscribers. According to Sky, all of these platforms were used to infringe the company’s copyrights. 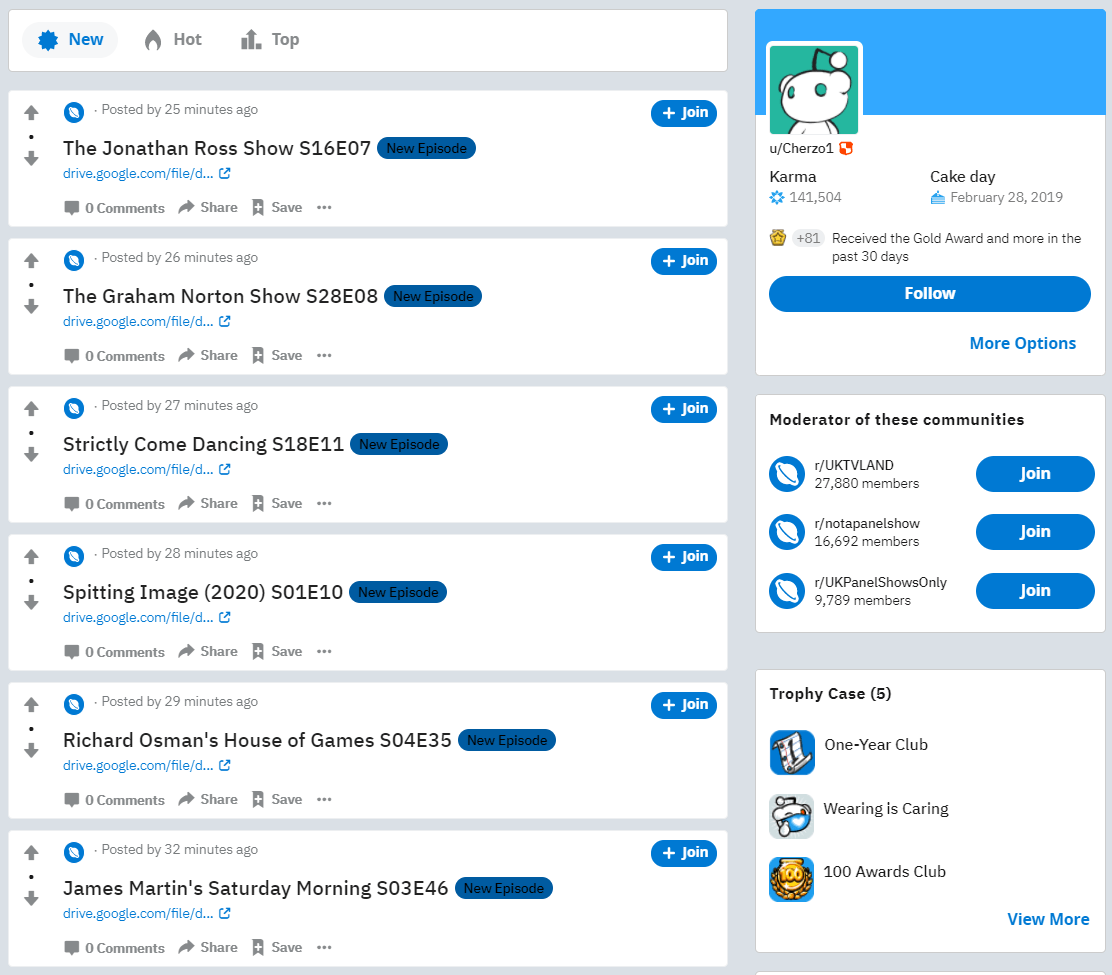 “The means by which the defender is averred to have breached the pursuer’s copyright is by Cherzo1 encouraging readers of the Subreddits to post requests for links to UK television programs and thereafter by the provision of hyperlinks to a Google Drive containing a copy of the requested content,” Sky’s complaint reads.

“Those hyperlinks, which are provided by Cherzo1, are visible and clickable by all readers, and clearly labeled to allow the user to identify the content that is being hyperlinked.”

Sky says that Cherzo1 breached its rights in many TV shows including Gangs of London, Cop Squad, Thronecast, The Russell Howard Hour, Portrait Artist of The Year, and A League of Their Own.

In evidence to support its action, Sky states that Cherzo1 was motivated by money, receiving payments from fans and followers via Patreon and directly into his PayPal account.

“The ‘About’ section on the Patreon account states as follows: ‘I have a YouTube channel and Reddit account that i use to post UK Panel Shows mostly, i need to have patreons to get computer equipment and online space to continue this, i would also like to get sources for recording shows to post, such as subscription to TV packages or IPTV Servers [sic]’.”

According to Sky, Cherzo1 didn’t make a great effort to hide who he was. The broadcaster says it was able identify the Reddit moderator as Alex Cherrie from North Lanarkshire in Scotland by various means, including the name on his PayPal, Steam, and Facebook accounts.

Additionally, Sky was able to match Alex Cherrie to a number of dormant Sky accounts which provided them with his physical and email addresses.

Sky Demands an Injunction Against Cherzo1/Cherrie

In order to curtail Cherzo1’s activities, Sky asked the court to hand down an ‘interdict ad interim‘, a term used in Scotland to describe an interim injunction. The broadcaster asked the court to order Cherzo1 to stop uploading copies of broadcasts, stop posting hyperlinks to shows on Reddit and anywhere else on the Internet, and forbid him from assisting any third party to do the same.

A court will grant an interim interdict if it believes there is a prima facie case against the defendant. The court found that on first view and based on previous EU rulings, Sky’s copyrights had been breached and although proof of financial gain isn’t necessary to show infringement, it had been shown that Cherzo1/Cherrie had benefited financially.

The court was also persuaded that Cherzo1/Cherrie had knowledge that his conduct was infringing. Sky had sent takedown requests to Reddit and the defendant subsequently published a notice informing users not to reference “Sky” in TV show requests. YouTube had responded to Sky’s complaints by closing Cherzo1/Cherrie’s account.

“The defender’s activities demonstrate infringement on a large scale,” Lady Wolffe wrote in her judgment handed down yesterday.

“The defender has in excess of 51,000 users across the Subreddits and had 95,000 users on the YouTube Account. The number of users of the Subreddits continues to grow: between July and November 2020 there had been a 17% growth in numbers.

“There could be no legitimate purpose in the defender’s activities on the two online platforms other than to benefit financially from his repeated copyright infringements. Infringement at this volume materially impairs the pursuer’s business model.

“I find that, collectively, these factor support the balance of convenience and the grant of the interdict ad interim in the terms sought,” Lady Wolffe concluded.

Anyone found breaching such an order could be subjected to a fine or even imprisonment.