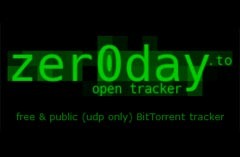 While torrents will work without them, trackers are valuable tools for finding other BitTorrent peers with the same content. They’re vital for those who have DHT and PEX disabled in their clients.

Trackers are fairly thin on the ground so to help to fill that gap, in early 2016, zer0day was born. The tracker can be used by anyone, but it had a spurt of growth when ETRG (ExtraTorrent’s release group) began using it.

As previously reported, the site had a bit of a bumpy ride in its early days but since August last year has been operating smoothly and without complaint. However, that all changed recently when the tracker was contacted by Russian telecoms watchdog Rozcomnadzor.

“We send you a notification on violation of exclusive rights to objects of copyright and (or) related rights (except photographic works and works obtained by processes analogous to photography), published on the website in the information and telecommunication network Internet tracker.zer0day.to,” Rozcomnadzor’s email reads.

“According to the article 15.2 of the Federal Law No. 149-FZ of July 27, 2006 ‘On Information, Information Technologies and on Protection of Information’, the access to the illegal published content is to be restricted within three (3) working days on receipt of this notice.”

Rozcomnadzor follows up by stating clearly that if the site doesn’t remove the “illegal published content”, it will have the tracker blocked by Russian ISPs.

Of course, stand-alone trackers do not carry any content, illicit or otherwise. They do not even have direct links to content. Trackers carry a hash value which can be matched to an IP address which in turn may be sharing that content. Even if a tracker ceases to exist, the content will continue to be shared, so targeting a tracker is useless.

It seems, however, that Rozcomnadzor either doesn’t a) understand or b) particularly care. In an attachment, the watchdog references a decision of the Moscow City Court dated November 28, 2016. 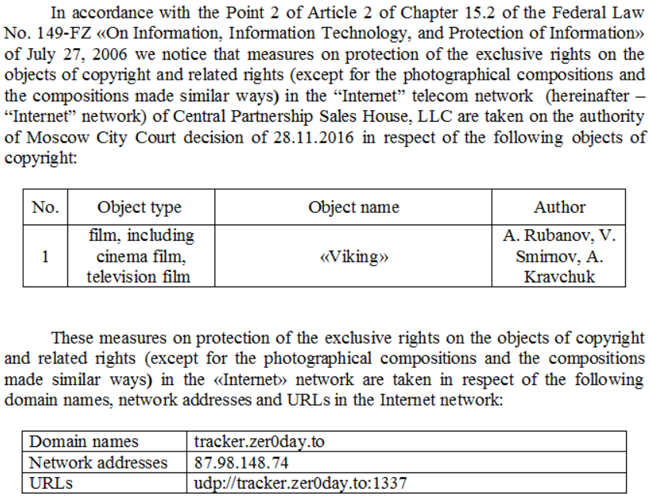 The movie ‘Viking’ listed in the complaint has been at the center of several other blocking actions in Russia, so it’s no surprise to see it listed here. However, zer0day isn’t hosting the movie and the URL cited by the watchdog is part of the tracker’s main announce URL and doesn’t link to the content either.

Furthermore, zer0day’s admin informs TorrentFreak that he can’t comply since the tracker doesn’t even have the feature to kill a hash.

“I won’t be removing anything. The tracker is compiled so that it doesn’t have a hash blacklist,” he says.

The only solution would be to block the whole site. Zer0day won’t be doing that but the Moscow City Court could if it processes multiple unresolved complaints about the tracker. But, as mentioned earlier, that won’t do a thing to stop people sharing Viking, as anyone with DHT and PEX enabled in their torrent client will carry on as usual.

Since the last time we spoke with zer0day, things have continued much as before with the tracker, albeit with some developments in the pipeline.

“It is tracking a modest 1 million torrents with around 3 to 4 million peers,” its admin says.

“Also, I started working on a simple online torrent editor which will be available on the tracker’s website. The script is quite simple but I’m so busy that I don’t know when it will be finished.”

Zer0day can be found here.