While ‘pirates’ don’t always come across as well-coordinated, the groups that make up the top of the piracy pyramid abide by strict rules and traditions.

This is particularly true for the more traditional release groups that belong to The Scene. These groups are highly organized and only share content among themselves through topsites. At least, that’s what they are supposed to.

Scene groups “race” against each other and their ultimate goal is to be the first to release a certain title. The more races they win, the more credit they earn, simple as that.

For most release groups it’s their reputation that counts. Money doesn’t play a major role in this game. Of course, some cash is needed to buy equipment and other gear, but the topic is generally not discussed, neither are calls for donations.

Breaking with what may be described as a taboo, one Scene group has decided to cross the bridge.

Starting recently, TV Scene group “spamTV” is including a call for support in their release notes, as the screenshot below clearly shows. 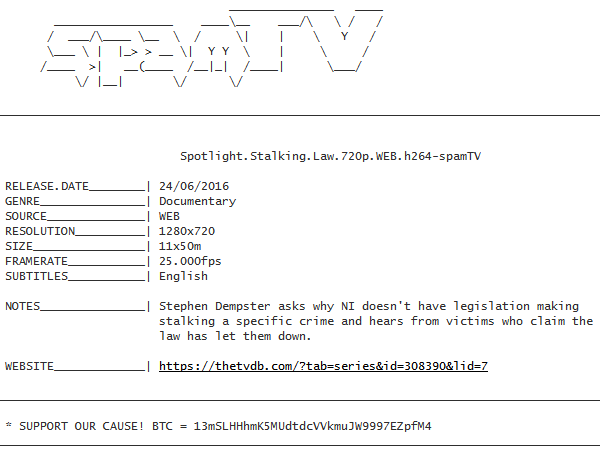 “SUPPORT OUR CAUSE! BTC = 13mSLHHhmK5MUdtdcVVkmuJW9997EZpfM4,” a note in their NFO file reads.

This is the first time we’ve seen a Scene group publicly asking for Bitcoin donations through one of their releases. Given that Scene releases are supposed to stay private, we also wonder who the call is for.

While it may be unique for a Scene group, donations are more common among other pirate sources. P2P groups, distribution groups, and torrent site owners generally cater to a much wider audience, and many ask their users to chip in.

Unfortunately for them, pirates are not known as the most generous bunch, so the income from donations is usually minimal, to say the least.

This isn’t very different for spamTV. After listing their request for Bitcoin donations in several releases, they have yet to earn their first penny.

Update: spamTV informed TorrentFreak that they were not the first group to accept Bitcoin donations. PoWeRUp did the same in 2014.

However, spamTV emphasizes that the reason to ask for donations was to pay for the “hobby.” Going forward spamTV will stop asking for donations.