A few years ago, Popcorn Time gained popularity worldwide, mostly thanks to its ability to stream torrent files through a user-friendly interface.

This rapid rise raised concern among many movie industry companies, who worked hard to contain the threat by going after several forks and their developers.

This resulted in the shutdown of several projects. Domain name blockades in several countries, including the UK and most recently Denmark, were used to further mitigate the problem.

The most unusual action, however, was taken in Norway where the economic crime police seized the Popcorn-Time.no domain name following a complaint from copyright holders.

This was highly unusual because the domain in question didn’t host Popcorn Time itself. Instead, the site posted news articles, as well as links to sites that offered the application. 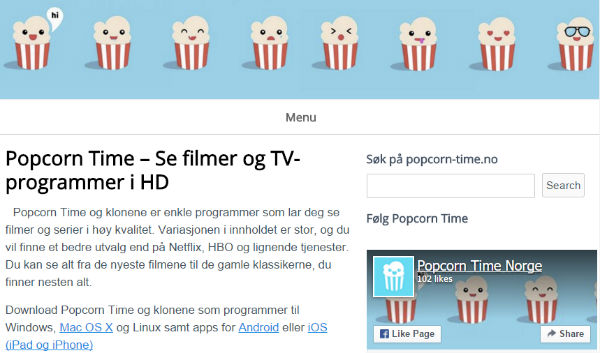 This broad takedown of a news-focused site raised concerns among digital rights activists and legal experts. They questioned whether the far-reaching measure, without a proper judicial review, was violating free speech.

Initially, the court refused to take on the case, arguing that both parties lacked standing, since they were not sufficiently affected by the domain seizure. This decision was appealed together with the legal owner of the domain name, the Norwegian company IMCASREG8, the domain registrar.

After several new filings and hearings, the Appeal Court decided that the case had to be sent back to the District Court again, which will start a new trial next week.

TorrentFreak spoke with senior lawyer Kirill Miazine, who will act as the legal assistant for the digital rights groups. He is looking forward to the hearings.

“This is going to be like the revenge of the nerds, as the usual suspects, who are monitoring the Internet and bullying the users and ISPs, are now going to be asked uncomfortable questions,” Miazine says.

“We’re also considering whether there are grounds to file a criminal case against the people who filed the criminal complaint against the registrant. We are serious about this. It’s not about Popcorn Time.”

Since the beginning, this case has been one against the seizure process of the authorities, rather than the site in question. The person who operated the targeted website is not even involved in the case.

One of the key questions that will be brought up during the trial, is how Popcorn-Time.no’s activities were different from all the mainstream news sites that covered and linked to Popcorn Time.

The rights groups are being represented pro bono by law firm Føyen Torkildsen, who are confident that they can win the case, and prevent similar broad seizures in the future.

“For us, the matter is about three core aspects: Internet freedom, free speech, and free software,” Miazine says.

“When they attack a tool which could be used legally and illegally, we have to fight back, as their next step could target Tor and VPNs. Of course, the case is about justice too: the police should not be agents of the called copyright groups..,” he adds.