When the news started to break in December last year, it looked bleak for the real Shareaza project. A company had somehow gained control of Shareaza.com, the domain name used previously for the real, open-source Shareaza P2P client, and was now passing its own pay service client off as the real thing. Something was seriously wrong, with many putting the pieces together into what could only be described as a conspiracy.

Now, lawyers for the “fake” or “imposter” Shareaza are threatening the real Shareaza team for a comment made by a user on their forum – things are getting out of hand. So how did this begin?

Last year a company associated with the French RIAA somehow obtained the Shareaza.com domain name from its owner, Mr Jonathan Nilson, who was given the domain in the belief he would keep it safe. Nilson would neither confirm nor deny that he had sold the domain, but speculation suggests that he may have sold it to avoid legal action. Others suggest the domain expired. Either way, the original owners of the domain (the Shareaza creators) don’t have it anymore.

Now the owners of the ‘fake’ Shareaza had control of the domain name previously associated with the real product (shareaza.com), it became easy to pretend to be them. There are two screenshots below – one is the ‘fake’ domain and one is the real thing. Can you spot the imposter?

The real, open source client is represented by the bottom graphic. The ‘fake‘ is at the top and according to Neglacio ;

ShareazaV4, is totally fake. It violates the open-source license, GPL (Version 2) in many ways. Also, it isn’t free nor open source. It requires a subscription and installs a suspicious toolbar. You can read what happened from this reference list: http://tinyurl.com/2cx7ff

Please, update your Shareaza version to Shareaza 2.3.1.0, and change the site from Shareaza.com to the new official site at Sourceforge: http://shareaza.sourceforge.net .

Understandably, the real Shareaza team and users are really upset that this outfit has effectively stolen their brand name from under their noses in a hostile takeover, and is actively ruining their reputation. It’s no surprise that emotions run high when people are ripped off so when a new signup to the real Shareaza forums suggested a small way to get back at the people doing this to them, it wasn’t anything so special. A user called Red Squirrel posted (quote courtesy of Google.com) :

Make it so the real shareaza program queries their site [shareaza.com] every couple of seconds. As an individual user this won’t take much personal bandwidth. But all shareaza users worldwide put together should be enough to kill their server and they won’t really be able to do much since it will be coming from so many different IPs.

Even though a moderator outlined that this behavior might be considered illegal, that wasn’t enough for Meister Seelig & Fein, lawyers representing the company that took over Shareaza.com. Despite now passing themselves off as the real Shareaza, the ‘imposter’ outfit clearly thinks they have the law on their side too. In correspondence sent to the ‘real’ Shareaza team:

This law firm represents Discordia, Ltd., the operator of the website Shareaza.com and owner of the rights in the Shareaza branded software distributed from that domain. Please be advised, that your forum contains a string of posts under the title: “suggestion to kill Shareaza.com.” Under the string, the poster, RedSquirrel offers directions for users of Shareaza software to implement a DoS that would have the effect of destroying or seriously impairing our client’s application and network. The poster OldDeath also offers a manner to illegally attack our client’s business.

Despite whatever complaints your forum’s users may have with our client’s proper and legal business activities, the type of activity promoted on your forum is illegal. Therefore, we request that you immediately remove this string of posts and any future strings of this nature. My client respects your users’ rights to express their points of view. However, the line is crossed when users begin to promote the destruction of a legitimate business (evidently based on out some misguided belief that artists and others who create music should not be fairly compensated for their efforts) via illegal or other predatory means.

If the above cited illegal activity on your site does not immediately cease and desist, our client will take all necessary action to vigorously and relentlessly protect its rights. To be clear, if this action is not immediately taken and, as result, our client’s business is harmed, we will not only pursue, locate and hold fully responsible each and every one of those who have implemented this, or any similar DoS, but also those responsible for maintaining your site and the forums.

Please confirm that the requested action is being taken immediately.

Meister Seelig & Fein is the same law firm that struck the distribution deal between iMesh and SonyBMG, so their involvement in this issue is no surprise.

Shareaza.com is offering a pay client that no file sharer wants, for many reasons, including keeping all hashes, downloaded files and chat logs in a database. We certainly don’t recommend it.

Those who prefer the real, free, open-source Shareaza experience should get along to Sourceforge or to this thread where all the genuine domains point.

On the one hand, The Pirate Bay lose a domain they bought legitimately because the IFPI doesn’t like it, but when a music industry outfit attempts the destruction of a completely legal piece of open source software by passing itself off as the real thing, no-one blinks. Sign of the times?

Update: It appears that Shareaza.com has been marked as a web forgery, illustrated in the screenshot below. 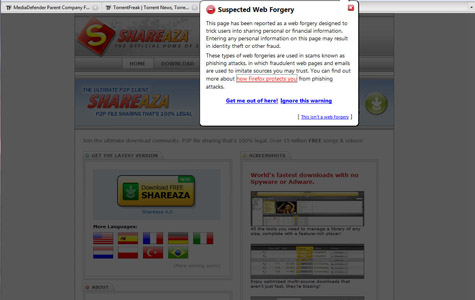