Sifonr is so new that it doesn’t really fall into an existing category of web-services. It is best described as a multi-user version of live streaming services such as Justin.tv and Ustream, supported by P2P technology, topped off with fully-fledged file-sharing capabilities. With a single click, users can create a Flash-based live video feed. Others can join the feed, send their own video and also share other files if they wish.

The name Sifonr originates from the word ‘siphon’ which is a U-shaped tube – a YouTube. The service uses the latest P2P capabilities of Adobe’s Flash and is the first site to really show off what it can do for real-time communication and file-sharing. It is not going to be any competition for torrent sites, but the innovative use of P2P technology makes it definitely worth a mention on TorrentFreak.

Aside from video and text chatting, Sifonr allows users to share files in real-time. To top it off the Flash-based Sifons can be embedded just as easily as a YouTube video, so people can post them to Facebook or their blogs (styleable widgets are available) to provide a direct communication channel or discussion platform. 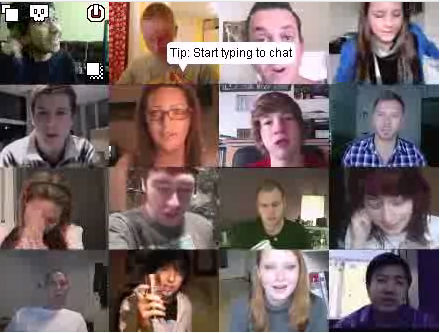 TorrentFreak spoke to Floze, the founder of the site, who sees Sifonr as a potential next generation communication tool.

“Sifonr is about sharing your thoughts and ideas, kinda like on YouTube, only in a more direct and more involved way. It’s not supposed to be another spin-off of some video or live-chat portal, I rather see it as a new way of communication.”

“For me it means the simple and logical ‘next step’ of today’s web-interaction, even if it turns out to be ‘only’ an interesting social experiment in the end,” Floze says. “The borders between author and reader, artist and beholder, broadcaster and consumer have diminished ever since I can remember. Now with Sifonr you are always both at the same time. Just passively enjoy it, or be an active part of it.”

In theory, thousands of people can join and share files in a single Sifon, but this of course will make the video streaming part pretty much unusable. Since the service has no real competitors it will be interesting to see how the public decides to use it. One feature that works well with multiple people is the file-sharing part. Floze told TorrentFreak that adding file-sharing support seemed only logical since the video and audio streaming is P2P based as well.

“File-sharing in a Sifon works pretty much like in any file sharing software – you load (seed) the file, it gets chopped into chunks of data, others get notified of its presence, and the downloaded pieces are immediately shared between peers and put back together when completed. Once a file is loaded into a Sifon, it is available as long as one healthy seeder.”

“The major limitation Adobe put on sharing is that, for security reasons, all shared data needs to be loaded into the system memory instead of being read and written from disc. The ‘official’ limit is supposed to be at 100MB per shared file, but I see no reason why more shouldn’t work if the RAM is sufficient. There shouldn’t be anything keeping you from sharing larger files, at least for stuff up to around 1GB,” Floze explained.

Any type of file can be shared in a Sifon, but FLV (flash video) files that are encoded with the latest magic h.264 and AC3 get a special treatment. These files are played directly and instantly in the Sifon as soon as sufficient data is buffered. Instant MP3 playing is another feature that is currently on the roadmap and will be implemented in the near future.

“I only created a piece of software that I thought was kind of missing, and that I’d use myself because I think it is fun. I hope that people use it to do something productive and enjoyable, though unfortunately I have seen many wanking dicks too [which receive an instant ban from sifonr.com] from people who think it’s all another Chatroulette clone. I hope it’s more than that,” Floze told TorrentFreak.

People who’re interested in trying Sifonr can start their own Sifon in just a few clicks (language can be set to English). The service works as advertised but people should keep in mind that it’s still in startup mode, and caution is advised while browsing Sifons as there’s no 24/7 flesh patrol yet. Adobe Flash Player 10.1 is a requirement as the P2P technology wasn’t implemented in earlier versions.