Last month, the US Copyright Claims Board went live. Through this Copyright Office-hosted venue, copyright holders can try to recoup alleged damages outside the federal court system.

The board aims to make it cheaper for creators to resolve disputes. There’s no attorney required and the filing fee is limited to $100 per claim. Accused parties also benefit as the potential damages are capped at $30,000. Those who prefer traditional lawsuits can choose to opt-out.

The benefits of the board are clear to many rightsholders. Opponents, however, feared that the system could be used by opportunistic rightsholders to extract ‘easy money’ from less law-savvy individuals.

Thus far a few dozen complaints have been filed at the CCB. There’s no sign of systematic abuse but a rather strange copyright infringement claim was submitted last week, one that set off several alarm bells.

The claim was submitted by a group called “Copyrights Protection”, supposedly on behalf of the UK media giant Sky Group. The claim accuses the streaming app HA Sports Studio of infringing Sky’s rights.

“They are showing Sky Sports live broadcast through their mobile applications on Google Play Store without the permission of our client Sky Group,” the claim reads. 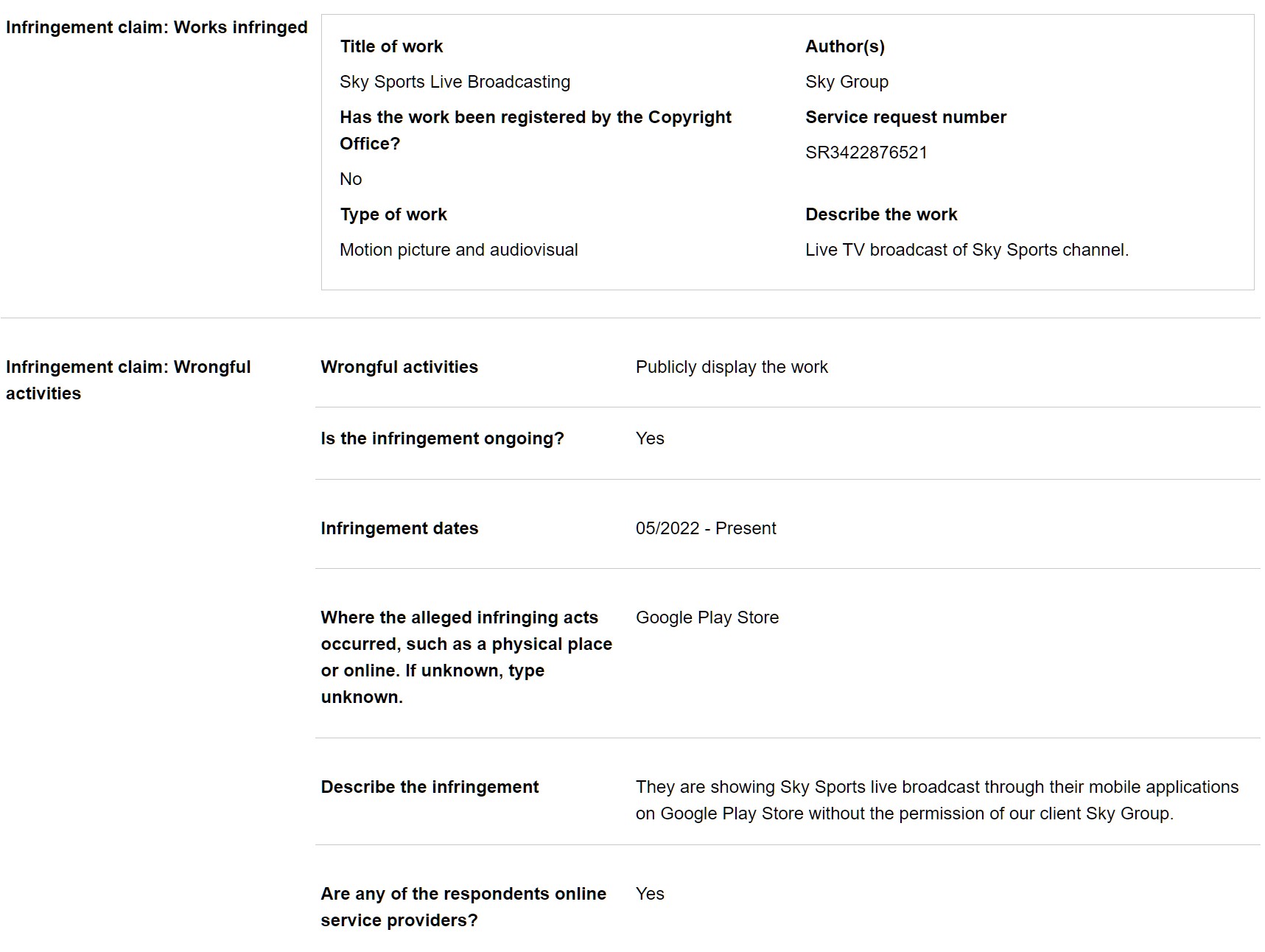 It would be a big deal if a major media company such as Sky began using the Copyright Claims Board to resolve a piracy issue. The piracy allegations may be true but in this case the claim itself is rather fishy.

When we go to the website of the supposed anti-piracy group we’re welcomed by a stock design template where various placeholder texts are still intact. There’s no contact address or information listed on the site either. 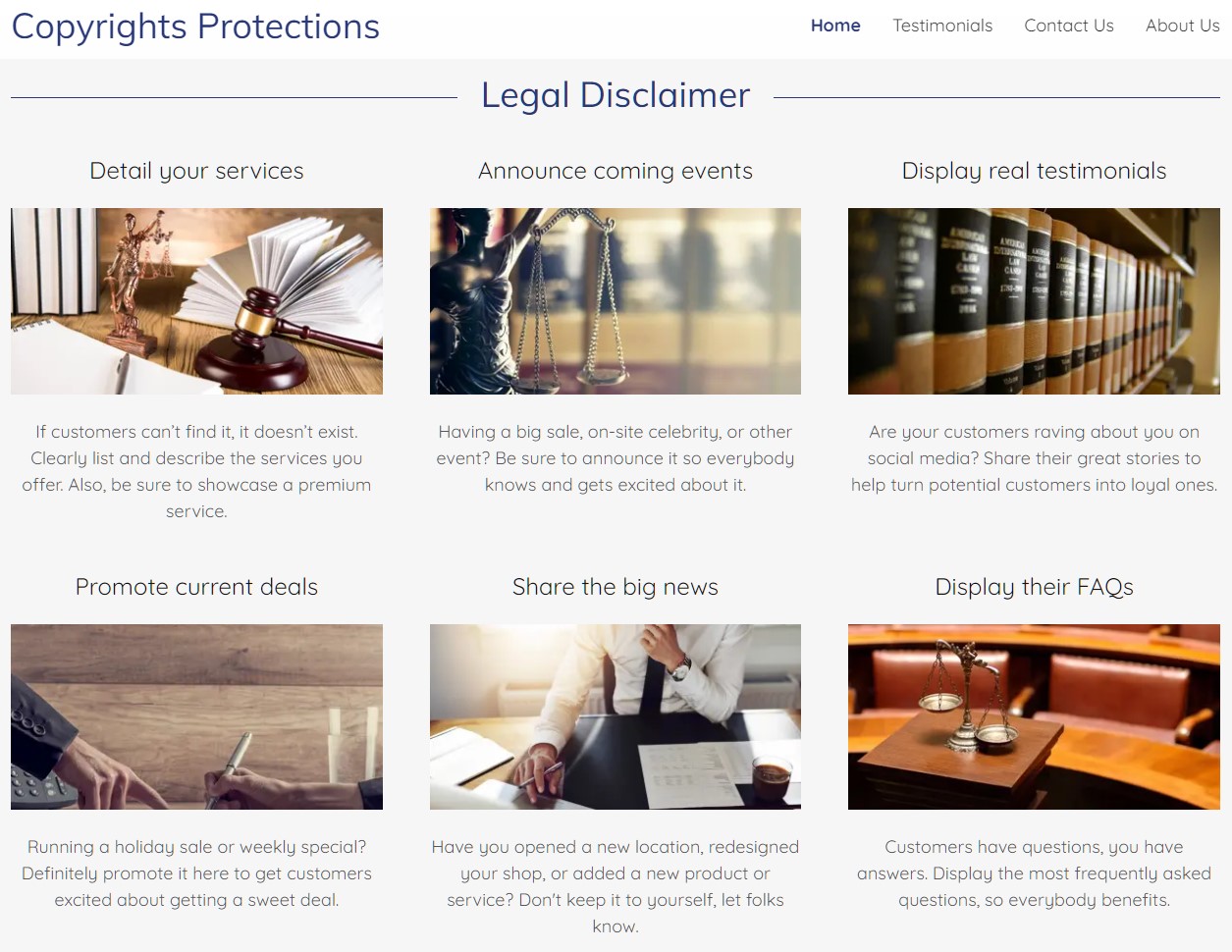 Sky is Not Involved

It seems odd that a company such as Sky would use an unknown and seemingly amateurish representative to file a case at the Copyright Claims Board. We reached out to Sky directly who informed us that it has nothing to do with this claim.

“This claim has not been brought on behalf of Sky. We have no association with Copyrights Protection, they are not authorized to act on our behalf and we will be contacting them to request the claim is withdrawn,” a Sky spokesperson informed us.

Sky’s response shows that someone is impersonating Sky at the Copyright Claims Board. This is relatively easy as rightsholders and their representatives are not required to verify their identity before submitting a claim.

When asked the US Copyright Office about this unusual case, it informed us that it doesn’t comment on pending cases or the internal work of the Board. However, it stresses that all cases go through a ‘compliance review’ where such inconsistencies may be revealed.

“Compliance review is the process in which CCB staff attorneys review a claim to determine whether it meets legal and regulatory requirements under the CASE Act and the Office’s regulations,” a US Copyright Office spokesperson says.

There is no formal identity verification process, as far as we know, but the Board may ask for additional information if needed.

“While the CCB generally does not conduct factual investigations, its review will naturally identify claims that have material inconsistencies and areas where the claimant may need to clarify certain issues, including its right to bring a copyright claim on behalf of another party.”

It remains unclear who is behind this bogus claim and why it was submitted. We sent an email to the contact address “Copyrights Protection” provided to the CCB, asking for clarification but at the time of writing, we have yet to hear back.

Meanwhile, the “Copyrights Protection” website is no longer accessible, which makes it even more likely that we’re dealing with someone who sent a claim in bad faith.

We can only speculate at this point, but it’s possible that the sender hoped to get a damages award, without Sky noticing. Another, perhaps more likely option, is that a rival pirate streaming app is trying to get competition out of the way.