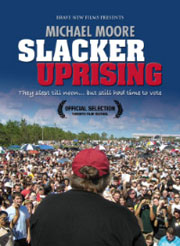 When Michael Moore released his latest movie, Slacker Uprising, he made it clear that not only would the movie be completely free, but he also wanted everyone to “email it, burn it, and share it with anyone and everyone”. However, there was one rule – this generous offer from Moore would only apply to people living in the United States and Canada.

As we reported earlier, the decision to use BitTorrent for facilitating distribution of the movie made a bit of a mockery of the limitations of Moore’s offer, since using The Pirate Bay’s tracker sent the movie worldwide. So, even for a completely free movie, it seemed inevitable that the legal profession would get involved at some point, it was just a question of time.

It didn’t take long. In a letter dated September 25th, lawyers representing Westside Productions LLC, owner of the Slacker Uprising copyright sprang into action, demanding the removal of a torrent linking to the movie. However, they managed to make a novice error. Instead of contacting the host of the torrent site in question, the Swedish-hosted BTJunkie, they actually sent the US copyright takedown request (email & fedex) to their DNS provider, easyDNS.

easyDNS are based in Canada and, just like BTJunkie in Sweden, are not subject to the laws of the United States, although most lawyers don’t seem to understand this. Furthermore, since easyDNS aren’t even BTJunkie’s host, they are in no position to do anything about the torrent anyway.

Mark Jeftovic, a co-founder of easyDNS wrote: “But really, come on folks, please tell us that isn’t the basis for this take down request. Anybody with half a clue knows the net doesn’t work like that. In any case, I’ve sent them our standard ‘we’re not the web host, we’re just the lowly DNS service’, but I did point out this seeming contradiction in Michael Moore’s message vs his lawyer’s actions.”

Now that the lawyers managed to get a grasp of the role of a DNS server, they have withdrawn the complaint against easyDNS. They state that the problem is due to the fact that the infringing .torrent was hosted outside of the US and Canada, a situation which for some reason is unacceptable to their client and a ‘problem’ worth spending large sums of money on to remedy. Let’s be clear – no amount of money will solve this issue and it is absolutely absurd to even try.

“I’ve replied that they [the lawyers] should know it is highly impractical to attempt to impose geographical constraints on otherwise freely available files,” said Mark at easyDNS, “but I guess they want to give it a shot.”

Meanwhile, the admin of BTJunkie told us he has not yet received a takedown request.

Mo(o)re money down the drain….