For years the music industry has blamed Internet piracy for all their troubles.

Slowly, however, the record labels are starting to realize that the Internet is the future and it will ultimately do more good than harm.

One of the people who embraces this positive view is Edgar Berger, Sony Music’s CEO of international business. In a recent interview he stressed the importance of the Internet, while noting that the increase in Internet sales almost makes up for the decline in physical sales.

“There is absolutely nothing to complain about. The Internet is a great stroke of luck for the music industry, or better: the Internet is a blessing for us,” Berger said.

“You can not blame the Internet for harmful excesses. On the contrary. It has brought us tremendous new opportunities,” he added.

But with these new opportunities come new rivals from an unexpected corner. According to the Sony boss, music rights collecting agencies are now preventing innovation in certain countries.

In Germany, for example, most YouTube videos by Sony artists are blocked due to the music rights group GEMA, and not because Sony wants it that way. When asked why Sony’s music is not available on YouTube in Germany, Berger responded bitterly.

“It’s not because of us. You must direct this question to the German collecting agency GEMA, they licensed the copyright very restrictively.”

It turns out that the price GEMA want for views is too high for YouTube, and as a result the videos of some of the world’s most famous artists are blocked. 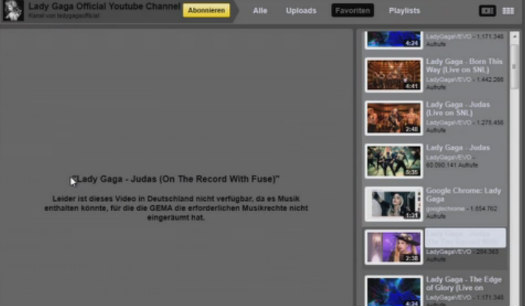 According to Berger, GEMA’s restrictive regime is not helping the artists or the music labels. In fact, he says the music industry is losing “millions in revenue”. Additionally, it’s one of the prime reasons why the digital music business is so far behind in Germany.

This is not the first time Berger has lashed out against GEMA’s practices. According to the Sony boss it’s time for the music rights group to embrace the digital age.

“We want to see streaming services like Vevo and Spotify in the German market. [These platforms] must not be blocked by GEMA any longer,” he said earlier. “Artists and music companies are losing sales in the millions.”

So here we have the boss of one of the largest music labels blaming another group for their repressive copyright enforcement. It’s the world upside down, but a promising change from Sony’s side.

This is not the first time GEMA has negatively entered the news this year. Last month the popular music streaming service Grooveshark decided to shut down voluntarily due to the “unreasonably high” licensing costs imposed by the music rights group.