In recent months a controversial piece of legislation aimed at shutting down file-sharing sites has resulted in massive opposition from all corners of the Spanish nation. Protests last year appeared to have been successful when the House of Representatives rejected the proposal, but the good news was short-lived.

In late January the Spanish Government resurrected the law with some cosmetic changes, a move that succeeded in further outraging the public who were joined by many artists and creators. But perhaps the most prominent opponent of the law came from an unlikely corner.

President of the Academy of Cinema, Álex de la Iglesia, criticized the so-called Sinde law (named after Minister of Culture Ángeles González-Sinde) as “a law that does not suit anybody.” In fact, so strong is Iglesia’s opposition, he said he would resign his position in protest, stepping down today, the day after the Goya Awards, Spain’s equivalent to the Academy Awards.

Supporters of the law, such as eventual Best Actor winner Javier Bardem, were reportedly booed and eggs were even thrown, but no such treatment was reserved for the outgoing President. 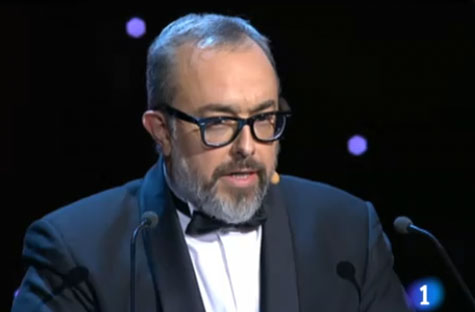 Iglesia, whose own movie A Sad Trumpet Ballad was running with fifteen nominations including Best Film and Best Director, picked up just two awards in the end – Best Makeup and Hair and Best Visual Effects – but his acceptance and departing speech will probably overshadow these achievements.

Iglesia spoke of how a quarter of a century ago, around the time of the Goya Awards creation, no one in the movie business predicted the effect the Internet would have on the industry.

“The Internet isn’t the future; it’s the present and the way for hundreds of thousands of people to enjoy movies and culture. The Internet is the salvation of our cinema,” he said.

Watched intently by Minister of Culture Ángeles González-Sinde, Iglesia added: “Web surfers don’t like to be called that; they’re actually people, the public. The public that we have lost because they don’t go to the movies anymore because they spend their time sitting in front of a computer screen. 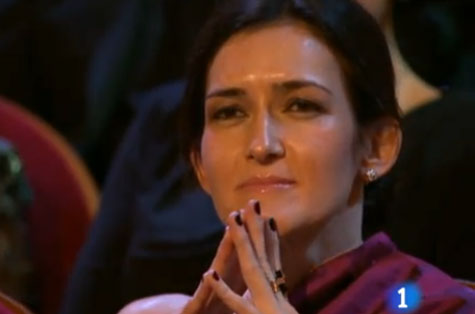 “Change is needed to come up with a new model for the film business. We have a moral responsibility to the public. We make movies because citizens allow us to make them and we owe them respect and our thank you.”

Iglesia said he wanted to use his parting words as president to send a message that there is nothing better than to be free to create.

“We must be up to this privilege that society offers us,” he said. “If we want them to respect us, we must respect them first.”