Traditionally, Spain has been one of the few countries where courts have affirmed that P2P-sites operate legally. This situation was met with disapproval by the United States Government who behind closed doors proceeded to help the Spanish authorities draft new laws to protect the interests of copyright holders.

Threatened with being put on a United States trade blacklist, the Government passed the so-called ‘Sinde Law’ in a rush late last year. The law allows for the blocking of allegedly infringing sites based on reports from copyright holders, a position similar to that proposed by the US SOPA bill.

Today the Sinde law went into effect and immediately it was met with resistance from opponents. The group Hackivistas was quick to organize a rather unique form of protest. They encouraged sites to link to a copyrighted track from the artist Eme Navarro, who’s a member of the music rights group SGAE, but critical of the Sinde law.

While Navarro generally publishes his music under a Creative Commons license, he created an “all rights reserved” track specifically for the protest. Thanks to the hacktivist campaign hundreds of websites are now linking to this copyrighted song without permission, and Navarro reported a first batch of sites to the Ministry of Culture early this morning.

As a result, the commission tasked with reviewing all the requests will be overloaded with complaints. All the reported sites have to be processed on order of arrival, so the protest will significantly slow down this review process. 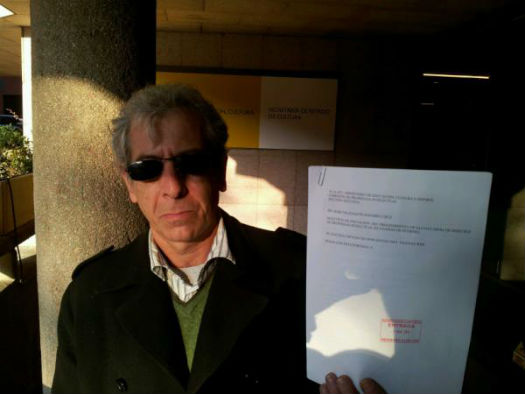 “The aim of this action is testing this law and being the first ones who use it in order to show the absurdity and the censorship that it will bring,” the hacktivists say commenting on their action.

The sites participating in the campaign do risk being blocked by Internet providers, but according to the law they have to be notified about the alleged infringement first. Then they get the chance to remove the infringing link to avoid being blocked.

Besides from the “sabotage” angle, another goal of the protest is to find out how the takedown process works. Right now there is still much uncertainty about how the commission will operate and how websites will eventually be blocked, a Hacktivistas member told TorrentFreak.

“Nobody knows how they will shut down websites. We suspect that they will ask Spanish companies hosting the websites to shut them down, and that Spanish service providers will block websites that are hosted outside of Spain.”

“They will also censor foreign websites, so anyone in the world can join us. We want to check what happens in every case,” the hacktivist added.

Hacktivistas is known for their controversial campaigns. In 2008 the group gathered in front of the headquarters of the socialist party to share copyrighted files in public. The police knew what was going on but didn’t touch them, suggesting that P2P downloading is legal.

Joining the current protest is easy, websites can add a link to the infringing track through a simple piece of code provided on the campaign website. Just make sure not to ask Eme Navarro for permission.