Once upon a time, Internet users were free to look at whatever content they liked. There was an almost complete absence of intervention from third-parties, which was mostly a good thing.

However, after the number of Internet users rocketed, more threats began to emerge. Viruses and other types of malware became pervasive, aiming to abuse users’ computers in various ways, from creating botnets to simple vandalism.

As a result, the security market has boomed. Barely a week goes by without some website or piece of software triggering an alert on a machine protected by good anti-virus and anti-malware tools. They don’t always get it right but most interventions are welcomed when the intention is to keep us safe.

Here at TorrentFreak we’re used to censorship. Every few months we’re contacted by readers trying to access our news articles on public WiFi, only to find that the site is blocked alongside various warnings, none of which are true. It’s almost as if the word ‘torrent’ in our URL has been blindly blacklisted for some reason.

Sadly, this week we’ve discovered that Steam, the popular digital game distribution and social networking platform, has jumped on the “let’s censor TorrentFreak” bandwaggon. A tip from a TF reader and Steam user highlighted the problems he’d experienced when trying to read TF articles via Steam’s chat interface.

“I don’t know if you’re already aware of this but the PC gaming software ‘Steam’ is flagging your website as ‘suspicious’ in its chat interface,” he explained.

As the first image below shows, Steam first flagged a link to an article we published this week detailing how Japan intends to crack down on sites that offer links to copyrighted content.

The small irony here is that the article details how Japan needs to bring in new and highly controversial laws to criminalize linking to copyrighted content, something which is currently legal in the country. Steam, however, is free to block links to our 100% legal copyrighted content on a whim, mark our platform as “suspicious”, while blocking users from reading our reports.

It is an original article that covers an important and growing issue in the gaming sector that will hopefully prove of interest to gamers – the very people using Steam’s platform. However, Steam users are prevented from following links to the piece because someone or something at Steam has labeled our news site as “potentially malicious.”

While these are just two examples, we could go on forever. As the large image below shows, Steam has banned our entire platform and put up a warning that’s not only completely false but also damaging to our reputation.

“https://torrentfreak.com has been flagged as being potentially malicious. For your safety, Steam will not open this URL in your web browser. The site could contain malicious content or be known for stealing user credentials,” the warning reads. 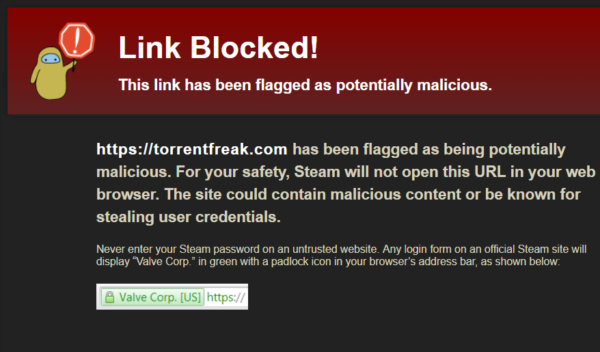 Of course, on its own platform Steam is fully entitled to block resources that it believes can harm its users. Some might even argue that it has a duty of care to do so, in order to keep its community safe. However, making blatantly false statements while blocking access to accurate news reporting shouldn’t ever be part of that.

Steam is no stranger to blocking links to sites in the file-sharing niche. Previously we’ve reported how it blocked links to KickassTorrents, The Pirate Bay, and MEGA.nz.

While the ban on MEGA was lifted shortly after our article was published back in April, the company appears to be out of favor with Steam once again. Tests show that Mega.nz links are completely banned by the gaming platform with a warning about malicious content and potential stealing of credentials. Meanwhile, known scam sites such as Demonoid.to are in the clear, according to Steam.

There is nothing malicious about our news resource and we’re really upset at the suggestion we might steal user credentials. We’d therefore be very grateful indeed if a Steam engineer could remove TorrentFreak.com from its blacklists, whenever he or she gets a couple of free minutes.

Update: Steam no longer refers to TorrentFreak as a malicious site. Thanks to Steam for the correction.