With millions of active users Steam is not just a game distribution platform, but also a social network and a communication tool.

Many people use Steam’s instant messaging tool for chats with friends. About games of course, but also about lots of other stuff.

Interestingly, it appears that Steam doesn’t want its users to talk about certain topics. When the popular torrent site KickassTorrents went offline earlier this week, one Steam user noticed that his messages on the topic were being censored.

“There is no warning or blocked message notification. The messages simply disappeared,” we were told.

After running some tests, which have been replicated by TF, it’s clear that messages mentioning the Kickass.to domain name are not coming through. It’s not just the domain that’s censored, but the entire message.

Below is an example of the vanishing text where the user sent the following three lines.

1. The next line may be missing
2. A line mentioning Kickass.to
3. Was there a line 2

The person on the other end of the conversation only sees line 1 and 3, without a warning or notification that the second line was not sent.

It’s unclear why Steam is censoring these conversations. TorrentFreak contacted Valve to find out more about the disappearing chats, but at the time of publication we have yet to receive a response.

It would be easy to conclude that the copyright infringing links on Kickass.to are the reason, but then it’s strange that The Pirate Bay and all other torrent sites are not affected.

Interestingly, however, kickass.to seems to be the only one that’s affected right now. Other domains including Kickass.so and Torrentz.eu are flagged by Steam as potentially malicious, and users get a warning if they attempt to open them. These domains do show up in private chats though. 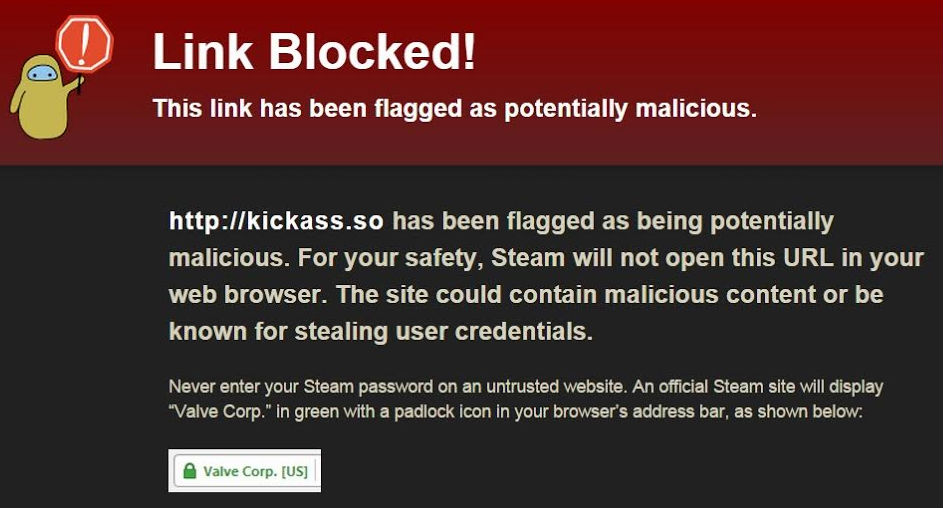 Without a comment from Valve the true reason for the awkward censorship measures remains unknown. It is clear though, that Steam is keeping a close eye on what people talk about.

That by itself is already quite concerning.