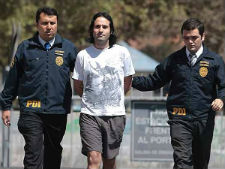 In South America, Cuevana.tv is a very popular TV show and movie streaming portal. The site carries an index of popular mainstream content which can be accessed via a smaller browser addon which pulls TV shows and movies from cyberlockers around the world.

In March, an alleged operator of Cuevana.tv was arrested by Chilean police, the culmination of a two month investigation prompted by TV show giant HBO.

Christian Alvarez, a 26-year-old student, was claimed to be one of nine alleged administrators of Cuevana.tv. The other eight, authorities claim, are stationed in Argentina.

Alvarez, a student at the University of Chile currently pursuing a Master’s degree, denied being a site admin, instead describing himself as just a user with some extra privileges. He also insists that he made no money from his activities at Cuevana.tv.

Despite his protestations Alvarez was subsequently charged with breaches of copyright law and forbidden from leaving the country while the investigation against him continued.

For their part, HBO said they were very happy with the arrest of Alvarez and congratulated the police on their action to protect intellectual property rights. But things quickly went downhill. Following his arrest, nothing could be found to link Alvarez to infringement of HBO’s copyrights. Perhaps worst still, Cuevana.tv continued to operate uninterrupted. Yesterday there was more bad news.

“Luckily everything went well for me,” said Alvarez in a statement. “A decision was made to suspend the case, because there was no evidence to support the accusations.”

While the 26-year-old will now go free, it seems that HBO didn’t leave completely empty-handed. They only agreed to dismiss their action against Alvarez after he agreed to abide by a set of fairly unusual conditions.

Firstly, Alvarez had to agree not to visit Cuevana.tv at all for the next 12 months, nor get involved in any other similar sites. Secondly and perhaps most controversially, Alvarez will have to give lectures on copyright issues to children in schools.

Commenting on the case, a spokesperson for the Argentinian Pirate Party told TorrentFreak that Cuevana.tv provides an important alternative distribution platform for local independents competing against Hollywood domination.

“Hollywood’s movies occupy all the space in theaters leaving little opportunity or decent running lengths for local films,” he told us.

To this end, Tomas Escobar, the alleged owner of Cuevana.tv, tried to reach agreements with local producers and called out to them to distribute their films through his platform. During December 2011, Cuevana.tv hosted the exclusive official release of the local movie ‘Stephanie’ directed by Maximilian Gerscovich.

Following recent events it’s unclear whether Cuevana will be able to continue this initiative. Authorities in Chile say evidence gathered in the recent case will now be sent to Argentinian authorities for their investigation.